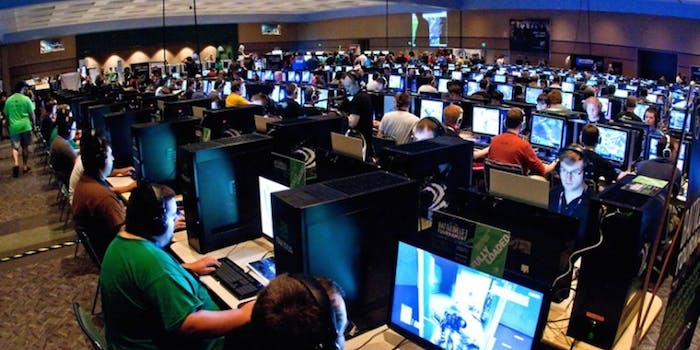 Take This has partnered with PAX East to help gamers struggling with anxiety and depression.

In 2012, the video game community was rocked by freelance writer Matt Hughes’s death. His work appeared in Official Xbox Magazine, Playstation: The Official Magazine and on multiple gaming websites including IGN, GamesRadar, and Joystiq. Before his suicide, Hughes sent an email to his editors letting them know his assignments would not be coming in. He wrote that he would not be available for future freelance work because by the time they read the email, he would be dead.

“Both my wife [Joystiq managing editor Susan Arendt] and I had worked with freelancers. I’ve probably worked with up to 400 freelancers and Matthew could have easily been someone that I worked with…” Pitts told the Daily Dot. “Matt may have seemed like a positive guy, but clearly he felt like whatever he was going through he could not talk to his friends about.”

Pitts and his wife asked themselves what they could have done if it had been one of their own writers. Out of that conversation the Take This Project was born. What initially began as a Tumblr where people could share their stories about mental health struggles has grown into a nonprofit charity. The organization wants to increase awareness and education for those suffering from a mental illness and their families, and eradicate the stigma. Their tagline is a familiar and powerful quote from The Legend of Zelda: “It’s dangerous to go alone. Take this.”

Take This offers support for anyone experiencing emotional distress, but it has a special focus on the gaming community. That kind of outreach from fellow gamers can put people at ease and do the most good, Pitts said. People may turn to games as an escape or to the gaming community because they have no one else in their lives who understands their passion for games. Take This encourages any gamers feeling depressed or anxious to talk to someone.

“It seems like a small thing to get people talking, but the fact is the stigma of mental health creates an inability for people to talk about what they’re experiencing,” Pitts said.

Take This is working to dispel that stigma through its blog and through outreach. It’s trying to build a network of volunteers to recommend people for treatment in the future. Right now when people reach out to them for help, they can only let them know they are not alone and breakdown the process of finding help.

The Take This next outreach appearance is today at PAX East in Boston. Members of the organization will host a panel, titled “Take This—‘But I’m Not Crazy,’” where speakers will share their personal experiences. A portion of the panel will also be devoted to role play to show how to interact with someone who needs help and start what could be a tricky conversation.

In addition to the panel, Take This collaborated with PAX organizers to create a dedicated “AFK Room” for anyone at the show who needs a break. It will be staffed by Take This-certified mental health care clinicians and volunteers who can assist attendees. They also created an educational curriculum to help volunteer “enforcers” at the convention recognize attendees in need.

If you or someone you know is suffering from depression or anxiety, you can learn more about resources to get help on the Take This website.