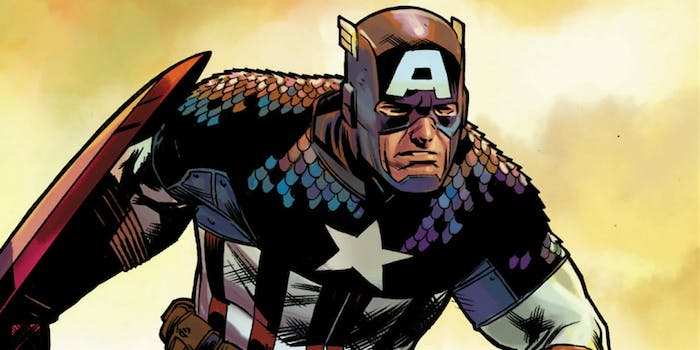 He'll be writing 'Captain America' on top of his announced 'Black Panther' series.

Acclaimed writer Ta-Nehisi Coates, who has spent the past two years writing Black Panther for Marvel Comics, will take on Captain America in a new series for Marvel.

The new series, set to launch July 4, is part of Marvel Comics’ latest relaunch. Coates was already announced as the writer on a new Black Panther series, so the revelation that he will also write Captain America makes it the second series he’s writing for Marvel when it relaunches. (Coates has also worked on Black Panther and the Crew and Black Panther: World of Wakanda.)

Coates revealed the news himself in an essay published by the Atlantic. He detailed the kind of stories he wanted to tell along with the fear that comes with “drawing with words”—the same kind of fear that entices him to write.

Ta-Nehisi Coates is writing Captain America. "I’m not convinced I can tell the story, I want to tell—which is precisely why I want so bad to tell it," he writes. https://t.co/63Y0DB3DaV pic.twitter.com/JtBDB8X7mw

Coates also announced that Alex Ross will illustrate the covers while Leinil Yu will illustrate interior panels for the series to give it a distinctive feel. Coates thanked the comics creators who helped him when he worked on Black Panther, as well as black comic book creators such as Christopher Priest, Dwayne McDuffie, and Denys Cowan who paved the way for him to be able to achieve his dream of writing comics.

“There has long been a complaint among black comic creators that they are restricted to black characters,” Coates wrote. “I don’t know what it means to live in a world where people restrict what you write, and the reason I don’t know is largely because of the sacrifices of all those who were forced to know before me. I have not forgotten this.”

You can read Coates’ full essay at the Atlantic.