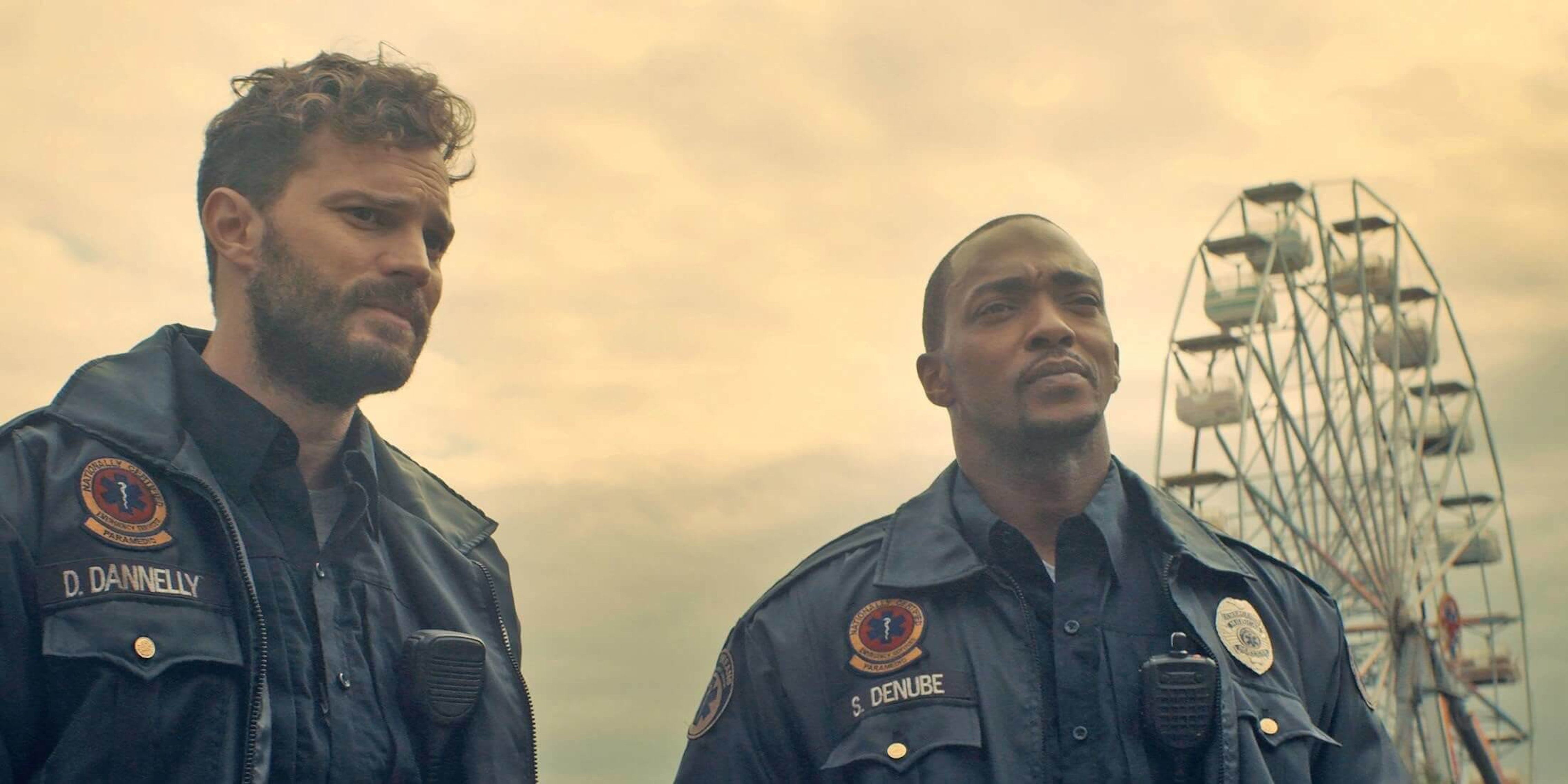 After making three brilliant and highly original low-budget sci-fi movies including 2017’s The Endless, writer/director duo Justin Benson and Aaron Moorhead may break through to the mainstream with Synchronic. Starring Anthony Mackie and Jamie Dornan, it’s an adult drama about a reality-bending drug that leads to a string of deaths in New Orleans. It’s also Benson and Moorhead’s first movie with big-name stars and a larger budget, but unfortunately, it doesn’t measure up to their earlier work.

Steve (Mackie) and Dennis (Dornan) are lifelong friends, a pair of paramedics who exchange cynical banter while visiting gruesome emergency scenes across the city. Dennis is a family man while Steve is a hard-drinking playboy, each envying the other’s life choices—an issue that causes friction because Dennis is kind of a whiner, while Steve bottles things up.

Like A Scanner Darkly, John Dies at the End, and the brilliant Upstream Color, Synchronic builds a high-concept thriller around a recreational drug with supernatural powers. The sci-fi worldbuilding is intriguing, but the execution falters because Synchronic almost feels like it should be two films instead of one. The first is a mature and original two-person thriller with a pleasingly specific setting (like Benson and Moorhead’s other films), while the second is a more conventional sci-fi adventure with Mackie’s character as the protagonist. Mackie is as watchable as ever, but his solo act becomes a problem. Without a back-and-forth between the two leads, we end up with multiple scenes where Steve just explains things straight to the camera, and sometimes those things don’t even need explaining.

In his capacity as a night-shift paramedic, Steve is the first to notice that Synchronic—the new designer drug—is leading to bizarre deaths. One involves a mysterious old coin; another looks like spontaneous combustion. What the drug actually does is the key mystery of the first act, so if you’re a spoiler-phobe, stop reading now.

When Dennis’ teenage daughter Brianna (Ally Ioannides) goes missing after taking Synchronic, Dennis and his wife turn to the authorities while Steve fixes his sights on the drug. Initially seeming like a hallucinogen, Synchronic actually makes you travel through time. So, Steve decides to experiment. Like The Endless, this film has beautiful visual effects and cinematography, adding a sense of trippiness without fully entering the stoner zone. Think Donnie Darko.

Steve’s time-travel adventures may be visually stylish, but to my mind, they arrive too late in the movie. It’s hard to introduce this kind of ambitious idea more than halfway through. Not to mention the clunky attempts at racial commentary, with Steve encountering historical racism while visiting Louisiana. Along with being a drastically new element to include in the final third of the story, it doesn’t measure up to the more nuanced time-travel stories about racism we’ve recently seen from creators of color.

If Synchronic was a random sci-fi flick I stumbled across on my Netflix queue, I might be more forgiving. But these filmmakers are capable of much more interesting work (including their shoestring budget debut, Resolution), so it’s disappointing to see Synchronic fall foul of common problems like over-explaining its worldbuilding and relying on convenient coincidences to support the plot. A solid choice to watch if it arrives on a streaming service near you, but not one of 2019’s best sci-fi releases.

Synchronic is currently screening at the London Film Festival.