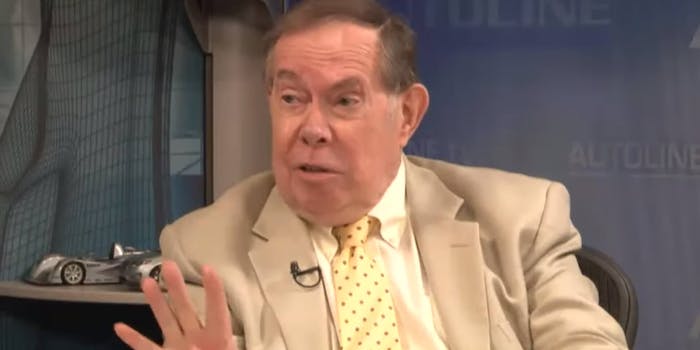 'A legend has left us today.'

The legendary artist was instrumental in bringing the breathtaking worlds from dozens of sci-fi favorites to life. His work on Aliens, Blade Runner, and Star Trek: The Motion Picture earned him the Art Directors Guild’s William Cameron Menzies Award, which he was set to receive at the Guild’s 24th Annual awards in February. He died in Pasadena, California, due to complications from lymphoma.

Mead’s style, which reimagined technology in a wholly creative way, made him a household name. He explained his process for creating Blade Runner‘s visual style in a 2015 interview with Curbed. “For a city in 2019, which isn’t that far from now, I used the model of Western cities like New York or Chicago that were laid out after the invention of mass transit and automobiles, with grids and linear transport,” he said. “I thought, we’re at 2,500 feet now, let’s boost it to 3,000 feet, and then pretend the city has an upper city and lower city. The street level becomes the basement, and decent people just don’t want to go there. In my mind, all the tall buildings have a sky lobby, and nobody goes below the 30th floor, and that’s the way life would be organized.”

Mead’s most recent projects include Mission: Impossible III, Tomorrowland, and Elysium. Fans of Mead’s artwork honored him on social media, sharing their condolences alongside pictures of his artwork over the years. “It’s uniquely sad that Syd Mead passed away just one month after his vision of the future in Blade Runner,” Dave Blass wrote. “The opening titles set the date of one of his most iconic visions at November 2019.”

Once attended a graduation where he and Jony Ive were guest speakers.

It’s uniquely sad that #SydMead passed away just one month after his vision of the future in Blade Runner. The opening titles set the date of one of his most iconic visions at November 2019 https://t.co/sIOtkd9j5E pic.twitter.com/9jTqp77RV0

Thank you to Syd Mead for all of his beautiful art and designs. It will live forever. TRON is one of my favorite films and worlds created… pic.twitter.com/EC60FKphEl

Fans flooded social media with their favorite images from some of Mead’s most iconic projects.

A legend has left us today.

His vision changed our culture, our collective perception of what is possible, and inspired so many of us today.

With a heavy and saddened heart, I say, R.I.P Syd Mead. pic.twitter.com/MnDT8ZuFia

RIP Syd Mead. Seems apt that he saw 2019 through to the end. pic.twitter.com/7aiRbDRDDw