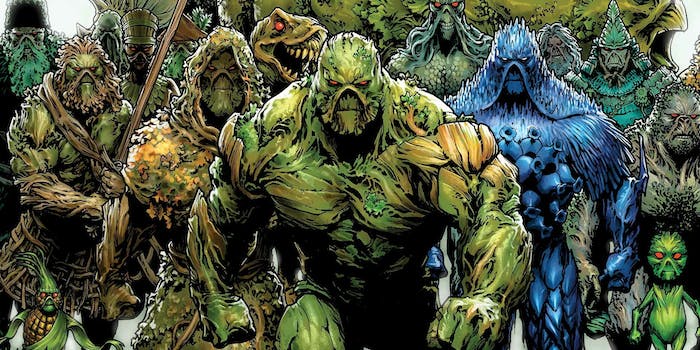 Get ready for DC's answer to 'The Shape of Water.'

Previously adapted into two rather schlocky movies and a ’90s TV show, Swamp Thing is a romantic horror comic with ecological themes. In other words, it kind of stands out from the other DC Universe shows, all of which are superhero adaptations. So far, they include Harley Quinn, Young Justice: Outsiders, and a live-action Teen Titans reboot. Swamp Thing will also be live-action, with Aquaman director James Wan attached as executive producer.

Judging by the Hollywood Reporter‘s plot summary, the show is based on Alan Moore’s iconic 1980s retelling of Swamp Thing’s origin story.

While DC found plenty of success with superhero shows like Arrow and Supergirl, the supernatural Constantine was a single-season flop. Swamp Thing is in a similar wheelhouse (in fact, it’s where John Constantine first appeared), and can’t rely on a familiar superhero/crime drama formula. Basically, it has to be weird. Swamp Thing has more in common with The Shape of Water than your average superhero show, so we’ll just have to cross our fingers and hope the writers know what they’re doing. Gary Dauberman has extensive experience writing horror (including, oddly enough, a Swamp Thing-adjacent B-movie called Swamp Devil), while Mark Verheiden is a sci-fi writer who worked on numerous superhero projects from Smallville to Heroes.