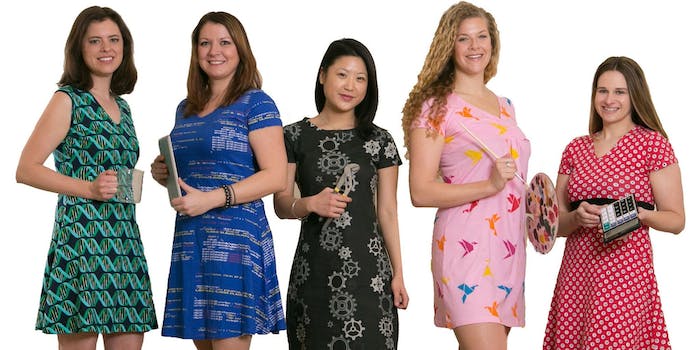 Two women are using fashion to combat the idea that scientists can't be feminine, too.

It can be difficult to find fashion that expresses a love for science and other STEM/STEAM (science, technology, engineering, arts, and math) fields that’s still feminine too.

While there are certainly options out there if you know where to look, certain items like dresses are pretty rare. Thankfully a new Kickstarter campaign will add to the geek-themed options available for women with a new fashion line called STEAM Angels.

The collection features five stylish dresses, each representing an area of STEAM. Each dress bears a different design: For science the dress features DNA; for technology, code; for engineering, gears; for art, origami; and for math, various symbols like Pi.

The campaign launched on March 1 and was fully funded by March 5. As of this writing, backers have funded it to the tune of more than $30,000, double the original goal of $15,000.

STEAM Angels is the brainchild of Svaha, a clothing company that wants to challenge gender stereotypes. This is Svaha’s second Kickstarter campaign; last March, founder Jaya Iyer crowdfunded the company’s line for children. She came up with the idea after she left a job as a senior apparel buyer at online geek retailer ThinkGeek in order to spend more time with her children at home. Her daughter asked her for a shirt with an astronaut on it and Iyer couldn’t find one. That started her thinking about the lack of science-themed clothing for girls, and prompted her to create Svaha.

In addition to these dresses, through the Kickstarter they are also offering an infinity symbol infinity scarf. As a bonus, a glow-in-the-dark constellation dress is now available since they met the stretch goal of $30,000. 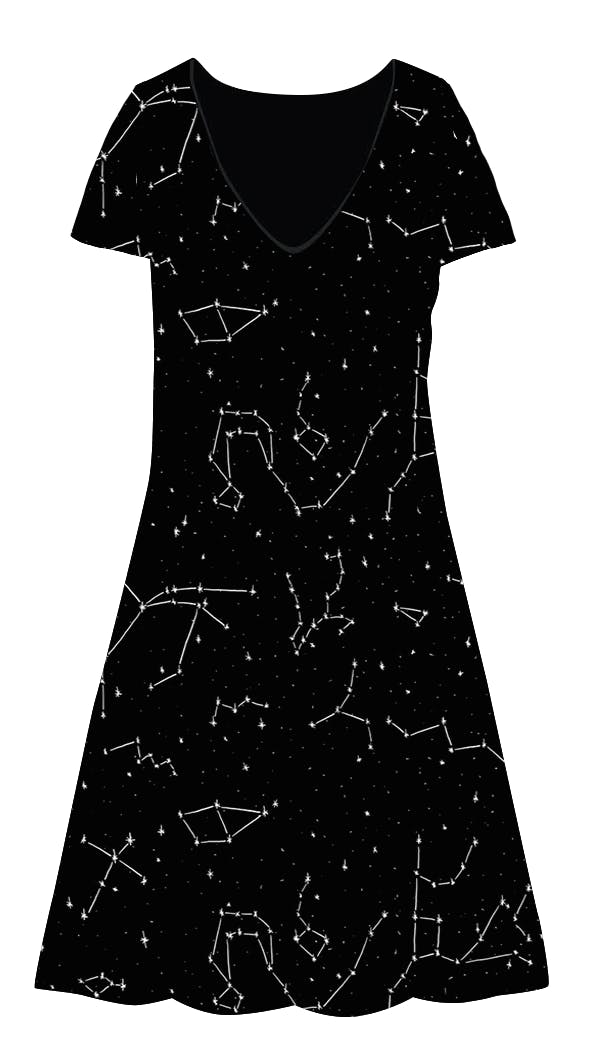 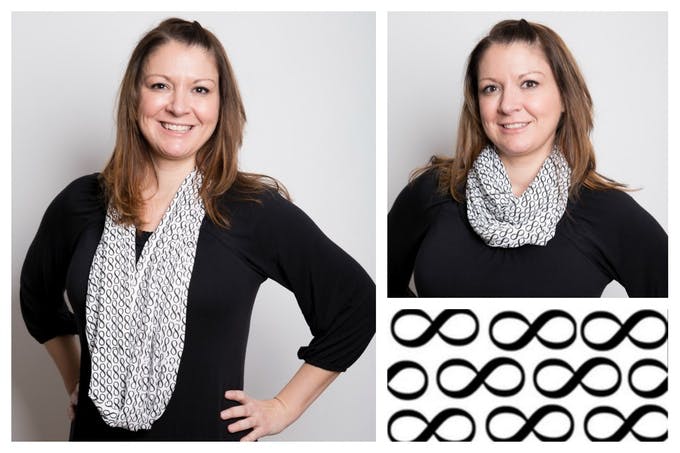 The original Svaha line featured items like “Future Astronaut,” engineering, and robot-themed designs, and more for kids. The current STEAM Angels line can thank that initial inspiration for sparking its creation. “After we launched Svaha we started having the moms of the kids and other people who didn’t have kids coming and telling us, ‘I want to wear that dress,'” Iyer said. She told the Daily Dot that when they were coming up with the designs they thought about what would look good on a dress and appeal to most people in the specific area.

“Our whole idea was also to not make it scream science,” she said. “If you don’t pay attention you don’t even know it’s DNA, but if you’re in science you know it immediately,” she said. “We wanted it to have that subtlety.”

Iyer bought T-shirts for women at ThinkGeek all the time and was always looking in vain for geek-themed dresses she thought customers would like. “You could find licensed stuff like Doctor Who, Marvel … but you couldn’t find the regular science, technology, engineering, math options.”

Looking around and discovering a dearth of both individual STEAM-themed dresses and whole STEAM fashion collections, Svaha decided to create STEAM Angels. It’s a collection that is especially personal for Svaha co-founder Eva Everett. Everett is also a former ThinkGeek employee and became good friends with Iyer when the two worked at the company. When Everett saw what Iyer was trying to do with Svaha, she decided to join her. The STEAM line is particularly important to Everett because she started out in molecular biology.

“I am a very feminine person. I wear a lot of dresses. I wear lip gloss. I wear heels, but I was also really good at what I did, and when I would tell people I was a scientist, one of the common responses I’d get was, ‘You don’t look like a scientist,'” she said. 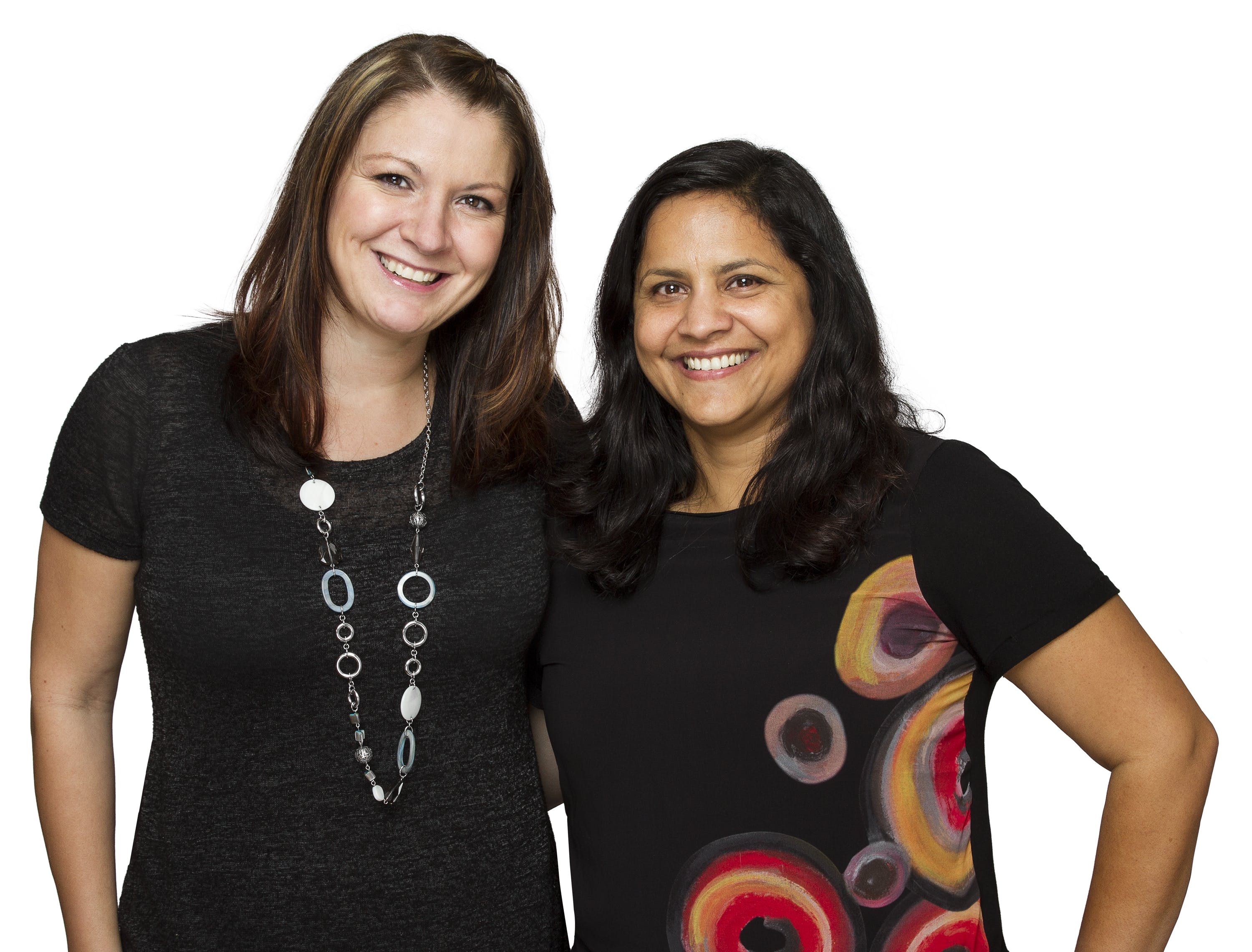 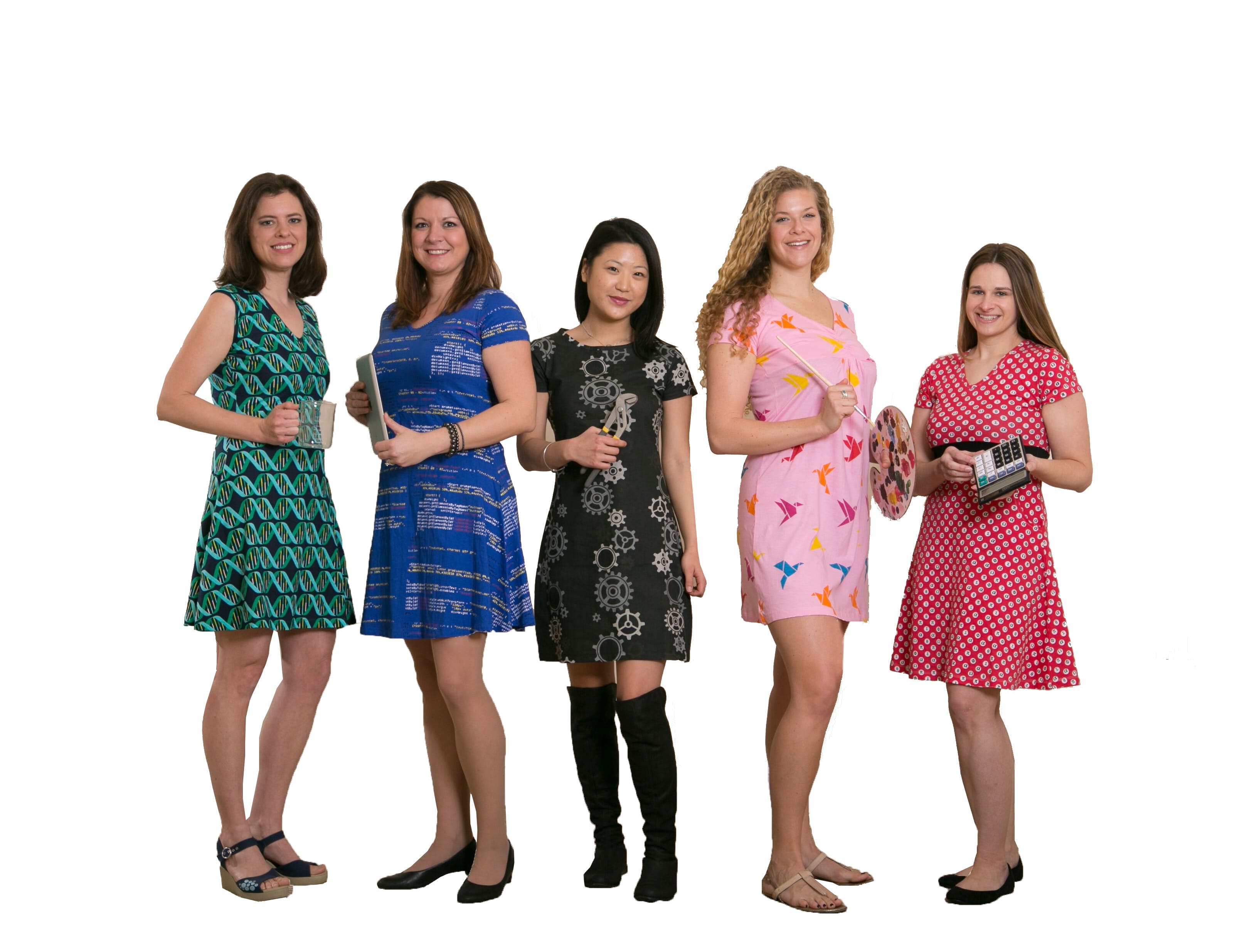 Everett was fed up with the stereotypical images of scientists as men in white lab coats. These stereotypes work to make it hard for women to be accepted in STEM fields.

“This is really our way of showing women that it is OK to be feminine and also to like science and technology and engineering and math because the two things do not have to be mutually exclusive,” she said. “We just really want a way for women to own it, and prove how awesome it is.”

Moving from children’s clothes to adult items came with challenges for Svaha, the biggest of which was considering what would look flattering on lots of different shapes. Iyer decided to return to Kickstarter to fund this line in order to gauge public interest in the collection before creating it. What they’ve found is that backers are deeply invested and eager to discuss everything from dress lengths to sizing options. Their dresses come in sizes from 2 up to 4X.

“We want to show that women of any shape and size can look absolutely beautiful and we want people to look and feel fantastic when they wear our clothes, so that was another making sure we have cuts that would be flattering to any body,” Everett said.

For anyone skeptical about how clothes and accessories can help make a difference in this field and support women in STEAM, Everett pointed out that fashion allows people to visualize and locate other people with similar interests based on their clothing choices. When fashion involves science and other typically male-dominated careers, it helps to make visible the many women interested in these fields.

“I think that the more we take baby steps towards involving women, making women part of the dialogue when it comes to STEAM and STEM, I think it’s going to be really important just to show that women belong in these fields, and it can be a feminine thing to like science,” she said.

“We’re trying to say, ‘Hey, you don’t—you don’t have to hide who you are. You can be feminine and still love these things,'” she said.

The crowdfunding campaign is fully funded, so now the company is looking toward stretch goals for STEAM Angels on Kickstarter. There’s also much more on the way as it works to expand its product lines. Iyer said they’re looking into adding more detailing on kids clothing, creating more scarves, addressing more requests for things like tween items, eventually adding more designs to the women’s line started with STEAM Angels, and possibly expanding into other garments.

We can’t wait to see what they come up with next and what they develop based on backer feedback. If the Kickstarter dresses are any indication of the future of Svaha, then things are looking up for the women of STEAM.