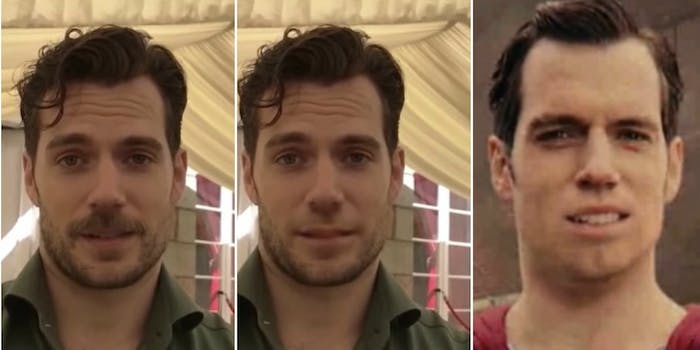 The 'deepfakes' AI can be used for good.

Remember when Warner Bros. attempted to digitally remove Henry Cavill’s mustache in scenes added to the final cut of Justice League? Of course you do. There’s no way to un-see Superman’s creepy uncanny valley face.

Well, it turns out Warner Bros. could have done a better job for much less money using AI and a $500 PC. That’s exactly how one YouTube user made Cavill’s scruffy upper lip look squeaky clean—without any of the visual weirdness that often accompanies digitally editing faces.

Warner Bros. reportedly spent $25 million overhauling Justice League after director Joss Whedon took over the project from Zack Snyder, who left for personal reasons. While that amount includes costs associated with extensive, last-minute reshoots, it also suggests Warner Bros. had to spend a ton to digitally edit out Cavill’s mustache, which he had to grow for his role in the sixth Mission: Impossible movie. (Late reshoots on Justice League caused filming on the two projects to overlap.)

Though this AI is, unfortunately, being used for diabolical purposes, it’s encouraging to see what it could accomplish when used for legitimate film projects. If it can delete Cavill’s mustache with great success on the cheap, think of how much easier that’ll make digital tattoo removal and other tedious alterations associated with modern filmmaking.