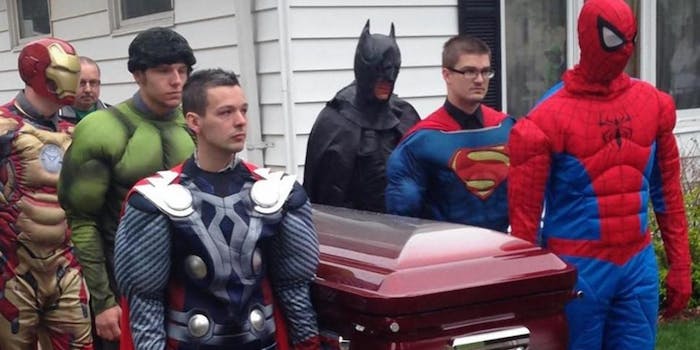 It was a hero's funeral in so many ways.

The great thing about superheroes is that they’re always there to fight the bad guys. Even when the odds are against them, heroes prevail. Light will triumph over darkness.

There’s a comfort in that. Perhaps because in life there are some evils that can’t be overcome with strong arms and a good heart.

Five-year-old Brayden Denton fought a different sort of battle than those he saw in his favorite hero movies and comic books. Staci Denton told WLFI in Newtown, Ind., that her son was diagnosed with an aggressive form of brain cancer in April 2013. The illness first stole his ability to walk and later prevented him from being able to eat and drink.

Brayden died on May 8 at the Riley Hospital for Children in Indianapolis. Though cancer shut down Brayden’s body, it did nothing to quell his fighting spirit.

Like any great superhero, Brayden battled against the odds. That’s something his mom remembered when she planned the boy’s funeral, shunning black suits and dresses for the colorful costumes of Brayden’s favorite heroes. A photo of the service has been circulating on the Internet showing Cory Denton, Brayden’s uncle, and other pallbearers dressed as Thor, Batman, Superman, Hulk, Iron Man, and Brayden’s favorite, Spider-Man.

ICYMI: These are the pallbearers for the funeral of a 5-year-old boy who died of cancer. https://t.co/fYFu5AI2SN pic.twitter.com/rX10C93n8A

“The whole time I saw them carrying Brayden he was probably up there going, ‘This is so cool,’” Staci Denton told the New York Daily News. “That was his world. That’s what he would have wanted.”

Just like fan communities have rallied around their smallest members in the past (remember the massive effort to turn San Francisco into Gotham City for another sick 5-year-old?), they’re also saluting Brayden for his bravery until the end.

“The staff of the Superman Super Site would like to extend our heartfelt thoughts and prayers to the Denton family,” Neil Cole wrote in a post on the Superman fan site.

Photo from Cory Denton via NYDN