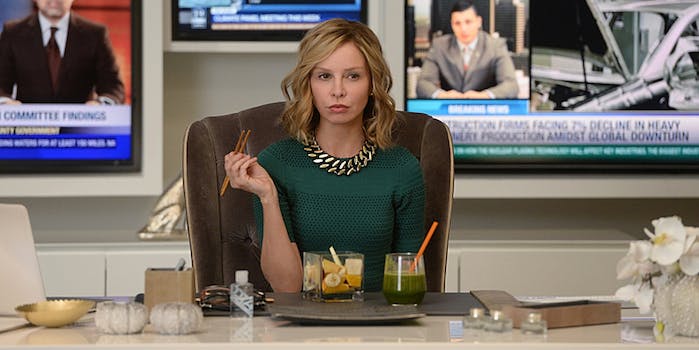 As soon as media tycoon Cat Grant showed up in Supergirl, she invited comparisons to Meryl Streep’s evil boss character in The Devil Wears Prada. But after just four episodes, it’s clear that she’s far more sympathetic—so much so that we suspect her of acting as a secret mentor to Supergirl herself.

Cat Grant is the only main character who doesn’t know Kara’s superhero identity, but recent episodes make us wonder if that’s really the case. There are already several clues pointing toward her having made the connection between Kara Danvers and Supergirl.

Looking at this evidence, you have to admit that the show is deliberately dropping hints that Cat Grant knows Supergirl’s secret identity—unless, of course, these are all red herrings.

If Cat has figured out Kara’s secret, we’re left to wonder what she’s going to do about it.

Is she content to give Kara occasional pointers to help Supergirl do a better job (and therefore sell more magazines for CatCo), or is she getting closer to Kara because she wants to write an exposé? This week, Cat seemed downright sympathetic when they had a heart-to-heart about their family issues at Thanksgiving. But did Cat have an ulterior motive—was she looking for dirt on Supergirl’s upbringing?

Whether or not Cat knows Kara’s secret, her role is far more interesting than we expected from the pilot episode. She’s quickly grown to represent an older generation of feminism—one that the show itself doesn’t necessarily endorse. She fought her way up to the top of her industry, but her drive to “push” herself and others led to Leslie’s demise. Kara represents a second chance for her to take on that mentor role again—and this time she wants to do it right.