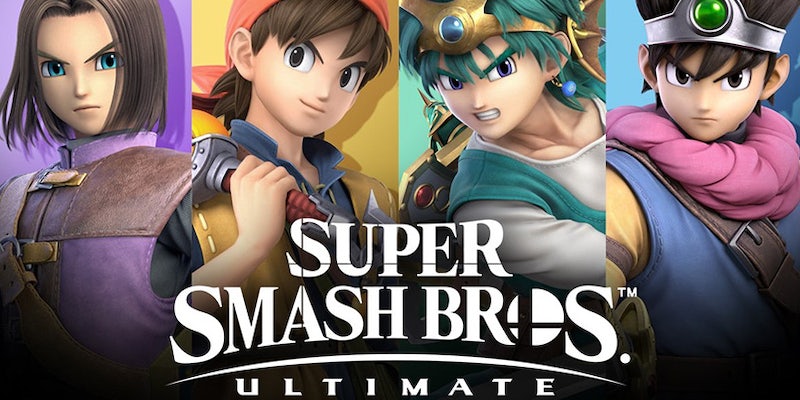 Everything you need to know about the new playable character the best fighting game on Nintendo Switch.

This pack doesn’t just add a new playable character to the already massive roster, it serves as a love letter to one of the biggest franchises in gaming history. Dragon Quest’s Hero landed as a surprise yesterday, and we’ve rounded up all you need to know about playing Smash Bros.’ Hero.

How to add Hero to Smash Bros.

Following Persona 5’s Joker, Hero is the second character in Super Smash Bros. Ultimate’s Fighters Pass. If you’ve bought the season pass that promises five new challengers, all you need to do is make sure your game has the most recent software update (Patch 4.0), and Hero will be waiting for you when you log in.

But what else can you expect when you fire your game up for the first time? Well, like the Persona pack, this content includes a new map, Yggdrasil’s Altar, original music tracks, and a Spirit Board featuring Dragon Quest collectibles.

Hero is also available on his own for $5.99, including all the extra goodies. Along with this update, players can buy Mii Fighter costumes based on popular Dragon Quest characters, including an excellent Slime hat.

Who is the Hero?

The first thing you might notice about Hero is that he isn’t just one new character. The game’s director, Masahiro Sakurai, is a big fan of Dragon Quest history, and it shows. This fighter can take the appearance of the protagonists from Dragon Quest XI, Dragon Quest VIII, Dragon Quest IV, and Dragon Quest III. As alternate fighters, there is no advantage or difference between the four versions, aside from their voice actor.

Dragon Quest heroes tend to be young men, imbued with a magical prowess and wielding ancient weapons. Though Hero looks like just another “anime swordsman” character added to Super Smash Bros, that couldn’t be further from the truth.

Players using Hero will attack with a wide variety of spells. While his smash attacks all make use of sword combos, his specials all invoke magic from the Dragon Quest franchise. Neutral moves use a fire spell, while side attacks summon lightning, and both can be charged for more damage. His recovery makes use of a small tornado to get above enemies or back on to the stage.

Magic is the most useful—and the most controversial—aspect of Hero. Every spell he casts consumes Magic Points, a meter tracked just above his character portrait on the bottom of the screen. By using Down-B, players can bring up a command selection screen that will offer even more spells to choose from. Thanks to this random assortment of powers, Hero has more options to attack and defend than any other character in the game.

Some of these spells can heal Hero, deflect attacks, or put the enemy to sleep. Others, like Thwack and Flame Slash can deal massive damage. The random elements of Hero’s command selection make him a highly specialized character. You’ll need to be familiar with the full range of his moveset if you want to succeed with him. Some moves, like Magic Burst and Kamikaze, can even put you at a disadvantage—or outright kill you!

This character is a bit heavier and slower than other sword users. It’s smart to keep some distance from foes, and use spells smartly to close the distance for a finisher. MP recharges slowly over time, but it replenishes faster as you enter combat. Using sword and throw combos is the best way to deal damage quickly, while watching from afar and looking to cast spells quickly helps keep the pressure on your enemy.

In the professional scene, Hero is already quite controversial. The potential for some unfair, unpredictable matchups is due to his vast array of spells. But Hero is far from broken; playing him well takes just as much practice and perseverance as any other fighter. This is truly one of the most unique characters in the Super Smash Bros. Ultimate roster, and with Banjo-Kazooie launching later this year, the game will only continue to get better.

Super Smash Bros. Ultimate and the Hero DLC is available now, only on Nintendo Switch.