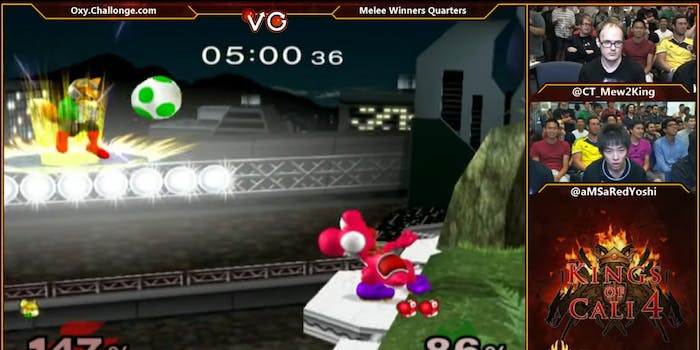 In an announcement stream on Wednesday, Evo organizer Joey Cuellar (aka Mr. Wizard) revealed the full line-up for 2019’s Super Bowl of fighting games. Super Smash Bros. Melee, a usual mainstay, is not scheduled to appear on the main stage for this year’s tournament.

Here is the official lineup for #Evo2019 ! pic.twitter.com/wgZrwXTGF3

Super Smash Bros. Melee was added as the eighth bonus game to Evo 2013 after the game raised the most donations for The Breast Cancer Research Foundation with an impressive $94,683. At the time, Melee’s fanbase was somewhat waning, and a featured spot at the premier fighting game tournament was a much-needed boost. From 2013 until now, the game had headlined Evo.

This year, the stalwart Melee will be replaced by the new iteration in the franchise, Super Smash Bros. Ultimate for the Nintendo Switch. Melee top players tweeted their reactions to the news.

The thing to do now is to support all the other great grassroots Melee events that will take place this year, like CEO, Big House, Shine, SmashCon, & others!

It's more important than ever. We gotta continue to show the world why Melee is one of the greatest scenes of all time.

Really tho, can we all just appreciate how die hard and invested everyone is in Melee?`
I feel like regardless of what happens, good or bad, theres no community as tight knit and caring as the melee community. As long as that doesn't change the game will never die.

Sad that Melee did not make it in.
I know every game can't be at EVO and I'm happy for the people that got their game/games there

Just feels weird after many years and Melee still have such great numbers.

To add insult to injury, the Evo announcement stream was capped off by a tribute video to Melee showcasing the game’s great moments throughout the years.

Fighting game personality Andrew “Jiyuna” Fidelis summarized the odd feeling of showing this video after revealing that Melee would not be included in the tournament’s main lineup.

Even as an outsider, that Melee video was pretty painful to watch.

Could you imagine getting dumped by your girlfriend, but before she kicks you out she shows you a quick recap video of the time you spent together then says "Thanks, bye!" 😩 #EVO2019 pic.twitter.com/MBz8wg6AHu

Other followers of Evo, Super Smash Bros. Melee, and the fighting game scene are making memes to find sense of the situation. The current dominant narrative is that “anime killed Melee.” The anime-inspired fighting game Under Night In-Birth Exe:Late[st] is a newcomer in the lineup—and taking up a slot that could have gone to Melee.

An animated recreation of the EVO lineup reveal. pic.twitter.com/LyOV2eqo2c

The #Evo2019 lineup in a nutshell #Melee #UNIST pic.twitter.com/sPaj7b84J5

One particularly elaborate reaction video meme plays on the unfortunate stereotype that competitive players of the Super Smash Bros. franchise are less likely to take regular showers than the rest of the fighting game community.

Evo 2019 will take place Aug. 2-4 in Las Vegas, Nevada, at the Mandalay Bay resort and casino.