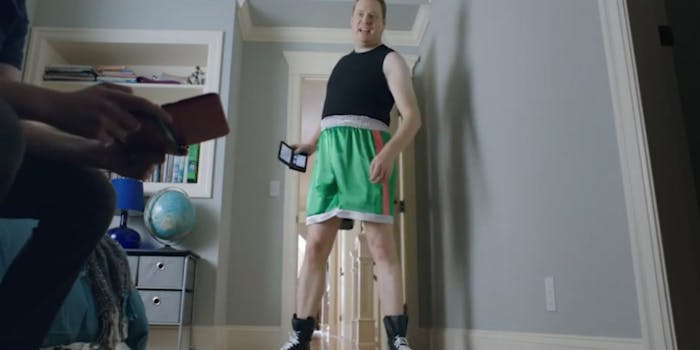 Get excited for Super Smash Bros. with these awesome Nintendo ads

Nintendo's ad team is killing it.

To get you into fighting shape for their biggest release of the year, Nintendo has published on YouTube a trio of live-action commercials encouraging people to fight over, well, everything.

Super Smash Bros. was released in 1999 for the Nintendo 64 console. It was a simplified version of a fighting game with a goal of knocking your opponents off the edge of a “stage” that was usually floating in mid-air. It used characters from unrelated Nintendo franchises like Super Mario Bros. and The Legend of Zelda and Pokémon, and set them on stages designed to resemble levels from famous Nintendo games.

The new Super Smash Bros. game for the Wii U has no release date. Super Smash Bros. 3DS, on the other hand, comes out on Oct. 3, so the middle-aged Dad featured in the commercial is in training. We wonder how many times the actor had to practice the jig he dances at the end.

It’s unfortunate that the girl in this spot had to choose the pink fighter, Kirby, by way of making a hackneyed joke out of reinforcing the stereotype that “girls couldn’t possibly be any good at video games.” It would’ve been cooler if she’d chosen, say, Link. She does get the pizza, though.

We also hope that no children try to take this spot at face value, and start offering Super Smash Bros. 3DS matches by way of deciding who sits where on the school bus. That would probably lead to some Nintendo 3DS units getting thrown out of bus windows.