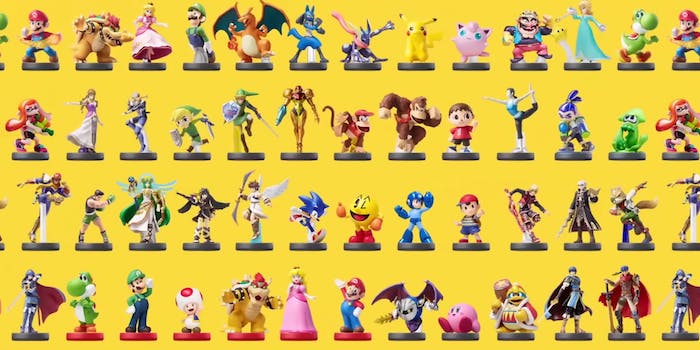 Never has a Wii U game supported so many of Nintendo’s popular, collectible figurines.

If you’re like an increasing amount of hooked gamers and love Nintendo‘s Amiibo, your habit will soon be out of control.

Until now individual Amiibo have mostly worked with a limited selection of titles on New Nintendo 3DS and/or Wii U. So if you base your Amiibo purchases on whether they actually add anything to your games, your collection of near field communication toys is probably under control.

But Super Mario Maker—the upcoming Wii U game where you may design your own Mario levels and share them online—will support more than 50 Amiibo according to a new Super Mario Maker overview video released today by Nintendo.

A mere aesthetic change like this might not be enough of a value add to motivate and expanded Amiibo collections. But a game that supports almost every Amiibo on the market might be tantamount to a gateway drug for hardcore fans.

Nintendo’s Amiibo figurines are selling so well that stores can’t keep them on pegs. Nintendo is posting profits for the first time in years, and some analysis are pointing straight at the Amiibo line as a partial explanation.

If you collect Amiibo, and if you plan on buying Super Mario Maker when it hits shelves in just a few weeks on Sept. 11. maybe start figuring out where you’re going to store all the new figurines.