Imagine that your television set is a canvas, and that your Wii U GamePad is a palette loaded up with every course element you’ve ever seen in a Super Mario Bros. game.

Super Mario Maker is what happens when Nintendo hands you the whole course element supply cabinet and says, “Go build something,” and then invites you to share with other players the fruits of your labor. Super Mario Maker is a construction tool bundled with the kind of online community Nintendo fans have always wanted. 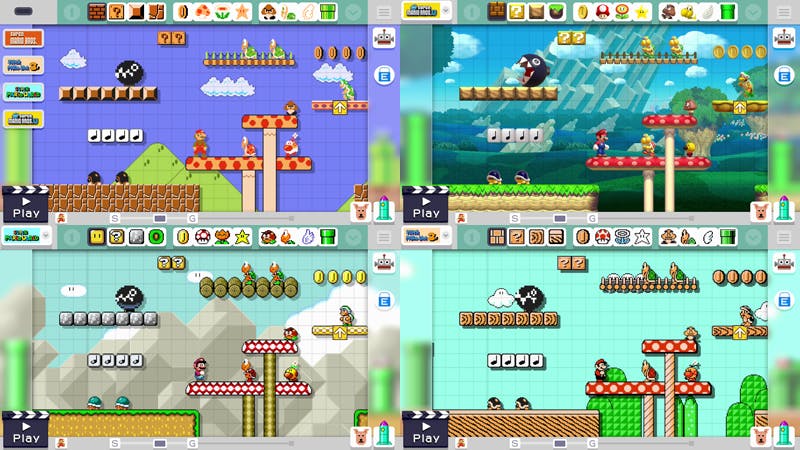 The 10 Mario Challenge is your best point of entry for Super Mario Maker. It’s a minigame that grants you 10 lives to complete eight short sample courses, each demonstrating a key building technique. The sample courses are then saved as templates for you to revisit and edit, by way of trying to understand how everything works.

The course build process on the GamePad is simple. A customizable toolbar at the top of the screen holds up to 12 course elements, including enemies, blocks, and power ups. To place elements into a course you tap the element on the toolbar with your stylus, and then tap inside the course.

You can easily get trapped into tapping out your favorite Super Mario Bros. music on the GamePad, as if you were playing a music rhythm game, and consequently filling your courses up with random stuff. This, then becomes wonderful practice for using the eraser or course reset tools.

When you tap-and-hold on enemies with the stylus to change their position within the course, some of them will struggle as if trying to get away. To make a larger version of an enemy, you literally drop a mushroom on them, because mushrooms in Super Mario Bros. equal “makes Mario big,” so why wouldn’t that also work for enemies? If you accidentally hold the eraser tool over Mario, he sweats nervously.

Throwing all of this at you simultaneously would be overwhelming. Super Mario Maker spaces the content out by giving you a few new pieces every day, until you’ve unlocked them all.

What keeps you from going completely off-the-rails with your design is that you can’t share any course with the Super Mario Maker community if you can’t actually clear the level yourself. It doesn’t count if you switch to Play mode within the course building tool to test the level. You have to do a proper, traditional run through your course, that begins when you select the upload option. If you can’t clear the course, you have to go back and edit some more until you can. 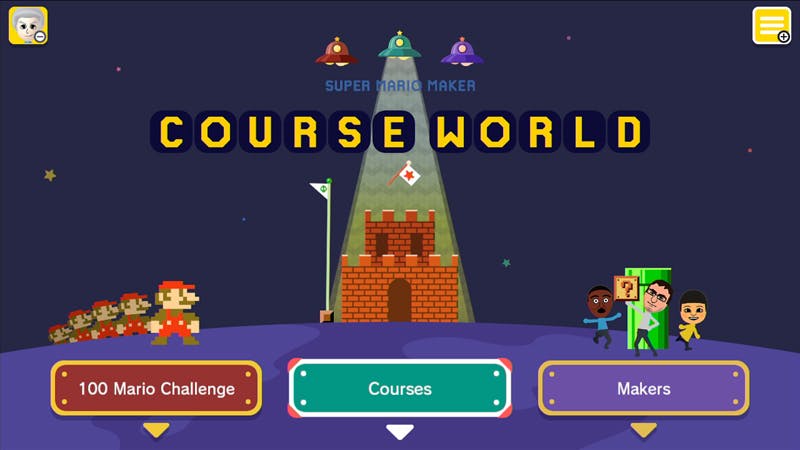 Course World is the social hub of Super Mario Maker, a combination of search tools and comment functionality by which Makers can share and discuss their courses. You can also download any course in Course World to edit and play in Make mode. You aren’t allowed to upload your remix, however.

The most important feedback you can leave someone else’s course is a star, because most of the search functions in Course World are based on how many stars a specific course or a course Maker has received, and when the Stars were received. New Makers get a kickstart with the Up & Coming category for freshly uploaded courses that no one’s played yet.

General feedback is delivered via the Miiverse, Nintendo’s social network on the Wii U and 3DS. Every time you upload a Super Mario Maker course, a corresponding post is created in your Miiverse activity feed.

Every course listing has a link to its Miiverse post, so you can read what other people are saying about a level before you give it a try. Course listings also show how many people have tried the course, and what percentage of them completed it.

If you try someone’s course, you can leave feedback at specific points within the course itself. Say you’re having trouble making a jump. You can drop an emoticon right at that spot in the level, and post a word bubble with your comments.

A red X marks the spot every time you die while playing someone else’s course. You’ll also see a red X at all the other spots where other players have died. This is a useful check before giving another Maker feedback, because maybe what you thought was a problem with the course is actually attributable to your lack of skill if few other people are missing the same jump.

If the average Super Mario Maker player is more interested in challenging platformer levels than in Rube Goldberg machines or art exhibitions, the Makers who focus on designing platforming courses will rise to the top of the rankings.

You can also expect pastiche courses meant to look like something out of Metroid or Donkey Kong Jr. or other classic Nintendo games. This is encouraged by the Mystery Mushrooms that only work in Super Mario Bros. game style courses. Each Mystery Mushroom gives Mario a costume to wear, turning him into Samus from Metroid or Link from The Legend of Zelda or Pikachu from Pokémon, to cite some of the 50 different costumes.

Using amiibo is the quickest way to unlock all the Mystery Mushroom costumes. If you don’t have $750 to spend on the 50 amiibo supported by Super Mario Maker, however, you may unlock the costumes by repeatedly completing the 100 Mario Challenge, in which you have 100 lives to complete a selection of levels chosen from Course World. 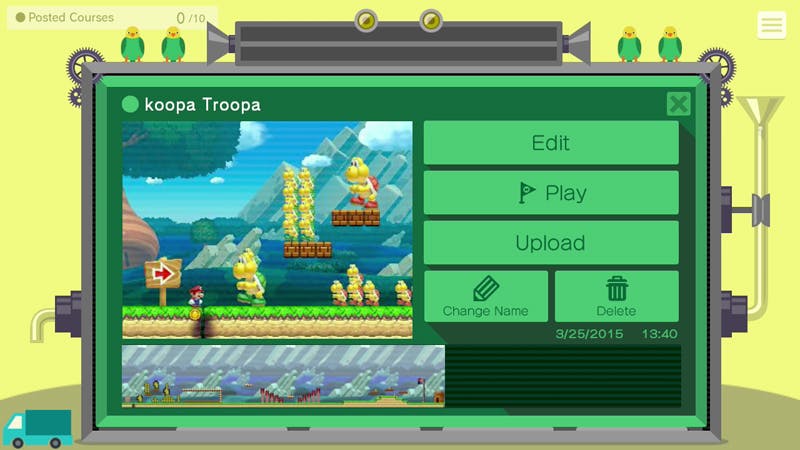 Messing around with Super Mario Bros. levels purely for local play (making levels and then handing your GamePad over to a friend to try), will be good enough for some Super Mario Maker players. If you want varied feedback on your courses from a multitude of people who really know Super Mario Bros., Course World is where the action’s at.

Logging on to Super Mario Maker every day during my review playthrough, I was anxious to see whether anyone had left feedback on the courses I’d uploaded. The most I usually look forward to any kind of social interaction on a Nintendo platform is when I look for the green light on my 3DS that indicates I have a new Streetpass, which figuratively amounts to someone waving hello on the street.

In Super Mario Maker, someone might leave me substantive feedback on specific aspects of my course build. I can try to leave constructive criticism on other people’s’ courses. We can learn how to make Super Mario Bros. levels together, and that’s not the sort of interaction with Nintendo fans I usually associate with Nintendo consoles themselves. Usually I turn to Reddit or other Internet forums for those discussions.

That’s not to say that I won’t be reading those usual sources as well, but it’s another step in the right direction for Nintendo in regard to embracing the online experience that defines modern gaming.

Super Mario Maker could continue to be relevant throughout the life cycle of the Wii U, much like we follow open-world online games or MMOs for years after release, checking in to see what the players are up to. Super Mario Maker is a franchise that could be extended to other, newer platforms in the future, and hopefully Nintendo in that case could find a way to maintain the library of the best work produced by Makers.

The idea of Super Mario Maker continuing into the future is wonderful, because this is a game that can bridge generations. When I was a kid, my dad and I had no idea how Nintendo created a Super Mario Bros. game.

Now, I can sit down with the next generation of my extended family and not only show them what Super Mario Bros. is through Super Mario Maker, but also peel back the curtain and figure out together how video games work.

I’d like to think that the wonder of realizing you can build your own game is more rewarding than the wonder of seeing those early games work in the first place.

Disclosure: Our review copy of Super Mario Maker was provided courtesy of Nintendo.