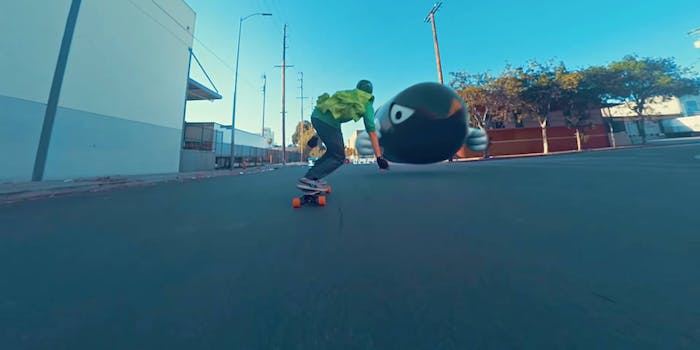 Super Mario Bros. makes this skateboarding video different from all the rest

This isn't your average skateboarding event.

Want a video to go viral? Just throw Super Mario Bros. into it and you should be good to go—even if your subject has very little to do with the Mushroom Kingdom.

That’s exactly what YouTube channel Corridor Digital did with its new electric skateboard video. The premise is that Luigi, after being surprised to learn that his time through a course was slower than his red-hatted brother, attempts to scrape a few seconds off his time and become number one.

It’s basically just a skateboarding video, but that doesn’t mean it’s not fun for Nintendo fans to watch.

If Corridor Digital sounds familiar, that’s because it’s the same company that made the amazing “real-life Grand Theft Auto“ video earlier this year.

The Luigi video has some cool visual effects and is entertaining enough. We recommend you watch it in glorious 60fps.

There’s also a making-of video that should shed some light on how the team managed to pull off all of these Nintendo-esque effects.