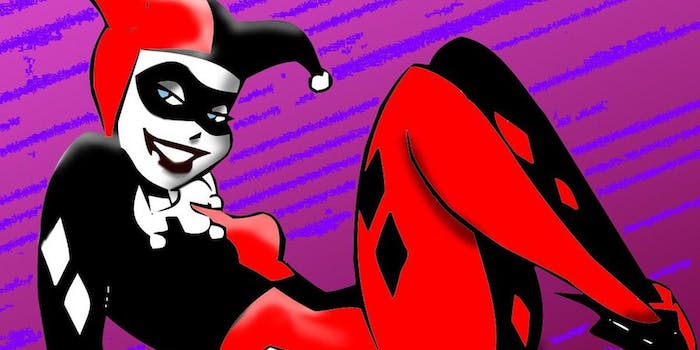 Margot Robbie isn't the only reason to be excited.

In the excitement around recently announced film adaptions for Marvel and DC heavy-hitters Captain Marvel, Aquaman, Black Panther and Wonder Woman, you may have missed some more obscure comic book adaptations in the lineup.

In DC’s case the most mysterious project is Suicide Squad, a supervillain team-up to rival Sony’s similarly sibilant Spider-Man spinoff Sinister Six. This movie will see DC villains like the Joker, Harley Quinn, and possibly Lex Luthor (Jesse Eisenberg) working as a kind of black ops team for the U.S. government. That is, if it’s a direct adaptation of the Suicide Squad comics.

Suicide Squad will tie into the DC cinematic universe that began with Man of Steel, potentially drawing characters from other DC movies like the Avengers did with the Marvel franchise. It’s due out in 2016, so casting rumors are spreading like wildfire, particularly relating to the Joker and Harley Quinn.

According to Collider, Wolf of Wall Street actress Margot Robbie has been cast as Harley Quinn, the Joker’s longtime accomplice and girlfriend. She is a fan-favorite character, so while Margot Robbie isn’t a particularly well-known actress, people seem excited to see Harley Quinn finally get a major role in a movie adaptation.

My favorite female comic book character is coming to the big screen! Margot Robbie as Harley Quinn in #SUICIDESQUAD pic.twitter.com/BZ95rsRqsr

Margot Robbie is Harley Quinn. Literally the only character I cared about in any DC thing finally got cast and it’s perfect.

This will be the first live action adaptation of #HarleyQuinn. I wonder how they’ll write the character. #SuicideSquad

Harley Quinn is one of the biggest question marks hanging over Suicide Squad because her character will be so difficult to translate to the realistic world of the DC/Warner Bros. franchise. She was first introduced Batman: The Animated Series in 1992, and later Paul Dini and Bruce Timm penned a comic telling her origin story: She’s Harleen Quinzell, an Arkham Asylum psychiatrist who falls love and develops an obsession with the Joker. In the comics her relationship with the Joker is abusive, her appearance is often highly sexualized, and her personality can range from cartoonishly zany to a dark depiction of trauma. The filmmakers will have to walk a fine line to create a live-action version of Harley Quinn who fits the overall tone of the franchise, but still resembles the character people love from the comics.

We’re still waiting for an announcement on who will play the Joker, with Ryan Gosling reportedly having turned down the part and Jared Leto now in the running. There are also several other well-known actors rumored for roles in Suicide Squad, including Will Smith and Tom Hardy—although Hardy would be a bit of a strange choice due to his role as Bane in The Dark Knight Rises, which isn’t linked with the new DC franchise.

Suicide Squad may sound like a weird idea when compared to more conventional superhero fare like Aquaman, but it could be very useful to the DC franchise as a whole. The basic idea of Suicide Squad is that imprisoned supervillains can have their sentences commuted in exchange for completing missions for the U.S. government, which gives us a handy explanation for why characters like Lex Luthor can return again and again after being defeated in previous installments. Also, this kind of crossover helps tie together different strands of the cinematic universe without having to overcomplicate the continuity.

The movie will be directed by David Ayer, who is known for films like The Fast and the Furious, Sabotage, and Fury. In other words, we can probably expect Suicide Squad to be more of a gritty action flick than a quirky Ocean’s 11-style team-up. But since this is the franchise that brought us Man of Steel, “gritty action flick,” was already kind of a given.