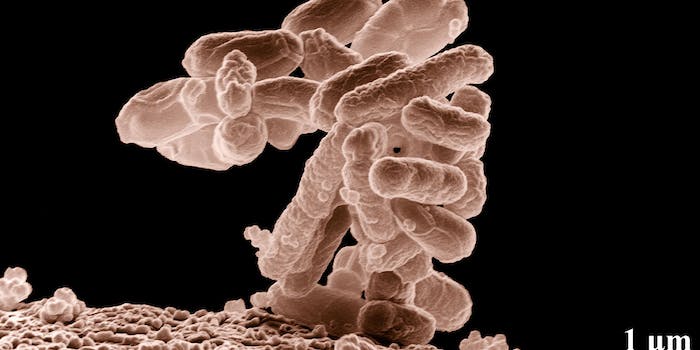 It’s not as gross as you think.

Microbes live in your gut and on your skin. They’re all up in and on your junk. They’re literally all around you all the time, yet we’re only just beginning to understand their world. Thanks to a new collaborative project, however, we know where they live in our public-transit systems.

Researchers and citizen-scientists are using MetaSub to profile the microbiomes of their cities one subway stop at a time, mapping out the diverse array of microbes floating and sitting around us.

The microbe project grew out of PathoMap, a project by researchers at Weill Cornell Medical College who wanted to know just how gross the New York City subway system really is. Turns out it’s not that gross, thankfully. Many of the microbes they found are also commonly found on human skin, which makes sense, because that’s what touches those surfaces most often.

But half of the microbes they found were unknown or unidentified. This may be because it’s hard to culture bacteria in a laboratory setting, and as a result, many microbes go unrecognized by science. Fear not, though—most bacteria, yeasts, and even viruses are harmless to people.

“The vast majority of the organisms that you touch on the way to work are innocuous, or they may only give you a fatal disease if you were a lobster,” Christopher Mason, lead scientist of PathoMap, told the Daily Dot.

Scientists, students, and volunteers all work together to take samples from the surfaces of the subway cars and the train stops. They photograph the object or surface they’re swabbing and upload their location and a timestamp of their collection to a database using a mobile app. The data are compiled into one huge, interactive map that anyone can play with online. The results are open-access, letting any researchers work with them for free.

“I’m a big believer in open-access journals and access to data. As a scientist, I feel it’s my duty,” Mason said. “I’m just telling you what’s out there in the universe. I feel like it’s my duty to release it to the world. It’s not mine to begin with, so I should give it back to the world.”

Mason and his team published their initial data open-access in the journal Cell.

If the full map is too hard to digest, the Wall Street Journal produced a version where you can explore by subway stop and bacteria type. The types of bacteria even include those associated with foods like kimchi and sauerkraut.

Mason said that researchers are harnessing his data to consider potential new drug candidates, particularly antibiotics. He also said that researchers hope to develop next-generation drugs to combat antibiotic resistance. They’re doing this by studying how microbes defend themselves as they engage in their tiny, microscopic warfare against one another. Hypothetically, if a yeast cell had a way to destroy a specific bacterium, researchers could harness that attack mechanism and turn it into an effective drug.

The maps of MetaSub also let scientists track diseases. This probably couldn’t be one in real time, Mason said, but the maps could let scientists monitor how diseases spread in densely packed cities. They can also provide a glimpse into how antimicrobial resistance spreads throughout a microbial community.

But Mason stressed that, most of the time, the bacteria we interact with are harmless—holding a subway pole is no different than shaking someone’s hand. That’s no reason not to carry hand sanitizer and wash your hands frequently, of course, but you might want to go easy on the Purell unless you see someone who is clearly sick touching all the same surfaces as you.

Overusing hand sanitizer or washing your hands too much, Mason said, can destroy the community of bacteria on your skin—many of which protect you from pathogens—and leave you open to infections.

Mason said that projects like MetaSub can also offer a way to track people, not just pathogens. The metagenome—the combined genetic contributions of microbes, plants, and animals—that we carry on our shoes can also be tracked using similar methods. In other words, your footprint could tell a scientist where you’ve been that day, week, or maybe even that month.

This obviously could be a problem for privacy, but it’s potentially useful in the field of forensics. At the very least, we’ll probably see such a method on CSI in the future, Mason joked.

Mason acknowledged that his project might gross some people out, but he also expressed hope that it would inspire their curiosity. He cited one artist who uses bacteria samples from the NYC subway for his art.

“Some people come away just thinking it’s gross. I don’t want them to come away with that; most [microbes] are companions traveling around the world with us,” Mason said. “They’re not like enemies in an apocalyptic sense. They’re an arrangement of mostly friends – some are absorbing toxins, some are making new drugs, some are helping keep your skin safe.”