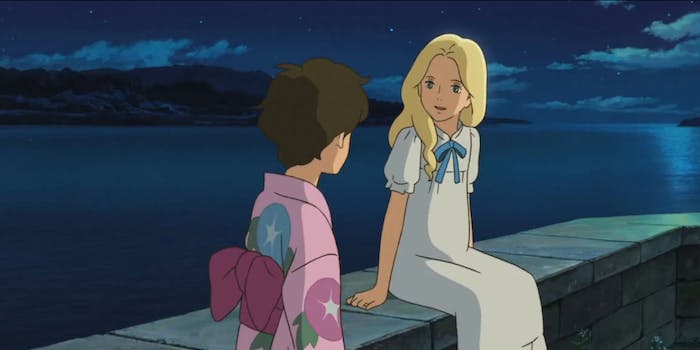 when marnie was here

Studio Ghibli releases new U.S. trailer for ‘When Marnie Was There’

Sadly, this movie may be Studio Ghibli's last

Prepare to have your heartstrings tugged, because the new Studio Ghibli trailer is here.

When Marnie Was There is based on a young adult novel by Joan G. Robinson, a story about a socially isolated young girl who makes a mysterious friend in an abandoned mansion near her house. Her friend, Marnie, is a ghostly presence who looks like she belongs in the early 20th century, and the trailer is full of the whimsical charm that has made Studio Ghibli popular across the world.

Directed by Hiromasa Yonebayashi (The Secret World of Arrietty), When Marnie Was There is rumored to be the last movie from Studio Ghibli. After the semi-retirement of visionary filmmaker Hayao Miyazaki in 2013, one of the studio’s top producers said they may take time out from releasing movies—and possibly stop doing them altogether. Many people feel that Miyazaki’s presence is integral to the company, although it’s worth noting that he is not credited as working on When Marnie Was There.

The film inspired a positive response from Japanese audiences last year, and is likely to do the same when it comes out in the U.S. this summer. But for longtime fans of Studio Ghibli, the enjoyment will be bittersweet.