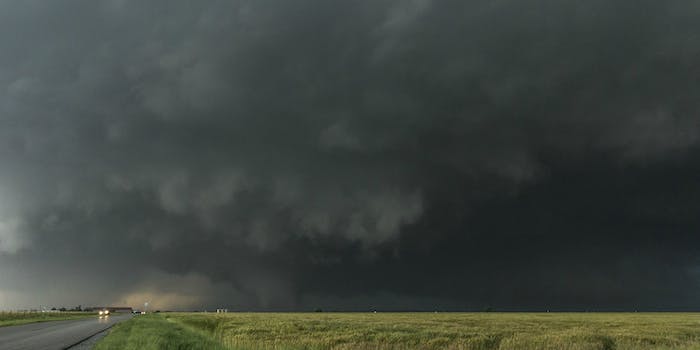 Student-built drone could be the future of storm chasing

When you think of storm chasers, you might not automatically think of a group of students using drones to analyze a tornado. But then, you might not have heard of The Sirens Project.

Three mechanical engineering students from Southern Polytechnic State University are working on the project that aims to use drones to better understand tornado dynamics, and as a result, provide data that can lead to more reliable tornado warnings and increased warning times.

“We’re looking for patterns in supercell thunderstorms to differentiate which ones will produce tornadoes and which ones won’t,” Sirens Project founder Warren Causey told ClimateWire.

The drones they hope to use will be guided by remote control, which will work from a distance of about five to 10 miles, potentially limiting the danger faced by the storm chasers. All of the students involved in the project have experience building unmanned aircrafts and have so far developed several prototypes for this tornado studying drone.

The students have launched a Kickstarter campaign asking for $10,000 to help pay for their work as well as travel expenses to actually go and chase tornadoes.

“The Kickstarter would enable us to build more of the final design that we have. We’re probably going to need multiple shots,” Causey said.

It’s an interesting idea for drone use that has the potential to make a big difference when it comes to saving lives from devastating tornadoes, considering right now there’s usually only a 12 to 13 minute warning.

“Currently tornado warnings have a 70 percent false alarm rate. With this data we can fine tune the warning system and give the public a better warning and a more accurate warning,” Causey explained in the Kickstarter video.