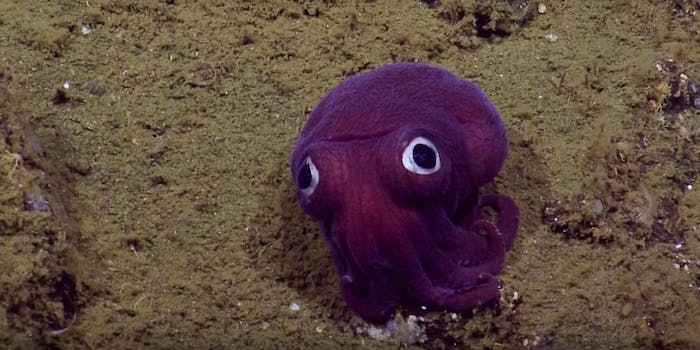 This squid is giving the adorable dumbo octopus some cuteness competition.

Scientists aboard the exploration vessel Nautilus always find something cool on the sea floor. Last year they found a cute little dumbo octopus who hid away from them when their lights were too bright. This year, they’ve found something… else.

“It looks like some kid dropped their toy,” cooed one researcher.

The creature is a stubby squid, a type of bobtail squid that is actually really closely related to cuttlefish.

We just can’t get over those huge, “googly” eyes. According to The Cephalopod Page, a resource on cephalopods run by a marine biologist at the Waikiki aquarium, these critters grow to about 6 centimeters in length and can get “transfixed” by diver’s bright lights. So perhaps that’s why the one seen by the E/V Nautilus seemed so petrified.

Whatever the case, we know one thing’s for sure: We want a plushie version of the stubby squid.