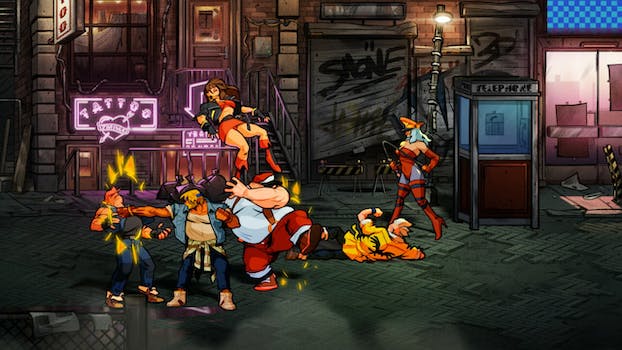 The classic brawler returns for one more round.

Are you ready to rage? Publisher Dotemu and developers Guard Crush Games and Lizardcube made a 24-year-old dream come true on Monday with the announcement of Streets of Rage 4.

The first entry in the iconic Sega beat-’em-up series to release since the 1994’s Streets of Rage 3 for Sega Genesis, the new installment will rock some fresh hand-drawn graphics and combine them with a set of modern mechanics to bring the franchise into the future.

Previously, Guard Crush Games handled the development of Streets of Fury, a similar brawler from 2015 that included much of the same attitude and beat-’em-up mechanics as Streets of Rage, albeit in a different wrapper. Streets of Rage 4 will feature a selection of new ways to fight and a brand-new story this time around as the sequel to Streets of Rage 3.

There’s no information yet about what kind of platforms the game will come to, but there’s a trailer to pore over. It features some pretty decadent animation and a soundtrack introducing Axel Stone and Blaze Fielding as they take on all comers. Yes, they look as cool as their names sound.

The internet can’t believe its collective eyes that this game has been brought into the present. As one excited gamer pointed out on Twitter, it’s an amazing time right now for Sega fans. Seriously, think about it. Shenmue, Yakuza, and now Streets of Rage 4? Next thing you know, they’re going to announce a Samba de Amigo that doesn’t rely on terrible Wii-based motion controls.

There’s a whole lot of love going around for the classic franchise.

Streets of Rage 4 is finally happening!

Also for real this time, following many failed pitches, cancelled projects across multiple generations of consoles and even the ground work for Fighting Force.

— Combo Broker has too many Dynasty Warriors games (@ComboBroker) August 27, 2018

I've just recovered from the news about Streets of Rage 4. But I'm also cautious, is this the real life or is this just fantasy? Also, the game NEEDS Yuzo Koshiro and Motohiro Kawashima involved! #StreetsOfRage4

I adore how many people are tweeting @ me reg. Streets Of Rage 4!!!

You can be damn sure I will b covering every single piece of info regarding this game that I can get my hands on!

Words cannot explain how happy I am 4 these tweets to come whilst I listen 2 "Go Straight" lol pic.twitter.com/dSOy7divY1

Streets of Rage 4 is coming so here's a reminder of why I go to the gym. pic.twitter.com/2Ke0tFN7SD

When I was a kid, me and a friend spent SO MUCH TIME with the first one; those games are top-notch beat-em-ups and I'm excited for more! I'm hoping they get Yuzo Koshiro to do the music!

I'm really excited about Streets of Rage 4 because it hearkens back to the golden age of beat-em-ups when political progress was made by taking to the streets to battle criminals, kickboxers, ninjas, robots, dominatrices, kangaroos and scary clowns.

Gamers can’t wait to get their hands on Streets of Rage 4, whenever that may be. Lookin’ good, Axel and Blaze!