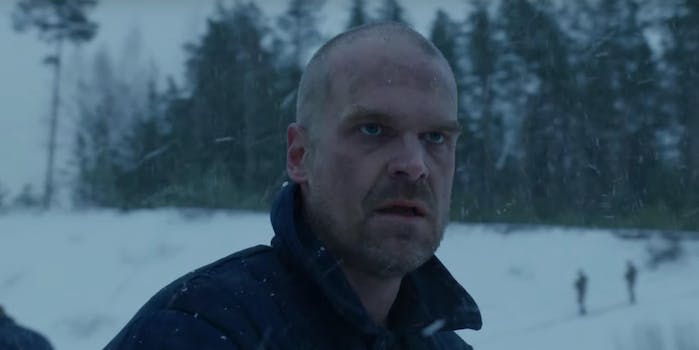 At the end of season 3, we see an explosion that appears to take out Jim Hopper (David Harbour). In the aftermath of the season’s final confrontation, the people who knew Hopper believe he’s dead, and the season 3 finale even features a montage set to a speech that Hopper wrote to El (Millie Bobby Brown).

But, as some fans pointed out, we never see Hopper’s body at the moment of the explosion, and almost from the moment the series dropped, people didn’t buy Hopper’s death as shown in the show. The post-credits scene further supported that Hopper was still alive as two Russian guards walked toward a prison cell with one saying, “Not the American” before they grabbed another prisoner to feed to a Demogorgon.

But, as the first teaser for Stranger Things 4 revealed, it isn’t going to beat around the bush when it comes to Jim Hopper’s fate: He’s alive and imprisoned in Kamchatka, Russia, where he’s forced to work on building a set of train tracks. But, based on the end of season 3, we know there’s much more to that prison than meets the eye.

A note from the Duffer Brothers confirmed Hopper’s return as well as some of the stranger things that await him.

“We’re excited to officially confirm that production on Stranger Things 4 is now underway — and even more excited to announce the return of Hopper! Although it’s not all good news for our “American”; he is imprisoned far from home in the snowy wasteland of Kamchatka, where he will face dangers both human…and other. Meanwhile, back in the states, a  new horror is beginning to surface, something long buried, something that connects everything….

Season 4 is shaping up to be the biggest and most frightening season yet, and we cannot wait for everyone to see more. In the meantime — pray for the American.”

From Russia with love,

Some might roll their eyes at the prospect of yet another fake-out death in a TV and film landscape that seems more interested in the fake-out than killing off its characters these days. But hey, at least Stranger Things got that mystery out of the way now and didn’t dangle that question in front of our noses for the better part of a year up until the season 4 premiere, right?