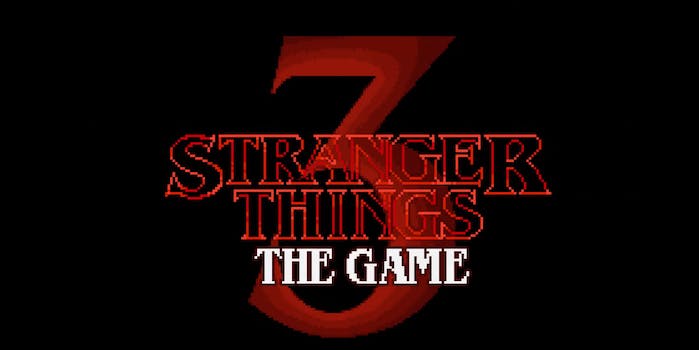 Stranger Things 3: The Game is the video game companion to season 3

There are even more 'Stranger Things' to enjoy.

If you’ve already made it through all eight episodes of Stranger Things season 3, don’t fret. The official Stranger Things video game—released on the same day—chronicles the events of season 3.

The game offers local co-op, 12 playable characters, and is currently available in the Windows store.

A colorful trailer for Stranger Things 3: The Game displays some of the combat options offered for players. The 8-bit trailer shows a few of the playable characters—including Dustin, Max, and Jonathan—using exploding robots, mysterious sparks, and their fists to fight back a number of foes. The game bills itself as “the official companion game” to season 3.

You can purchase Stranger Things 3: The Game from the Windows store for $20. While it features many of the events that unravel through season 3, it also offers a number of never-before-seen adventures.

Players can choose to traverse the in-game version of Hawkins, Indiana, solo, however, the retro-style game is intended to be played with a partner. All of the multiplayer is local, so no long distance team-ups will be possible.

Clocking in at just under 1GB, the game thankfully won’t take up much space on your system. The old-school artistic stylings of the game deliver the nostalgia Stranger Things is known for, while still utilizing modern game mechanics to keep gameplay fun and unique. If you’re looking to try your hand against the creatures of the Upside Down, this reasonably priced game may be the perfect way to spend your weekend.