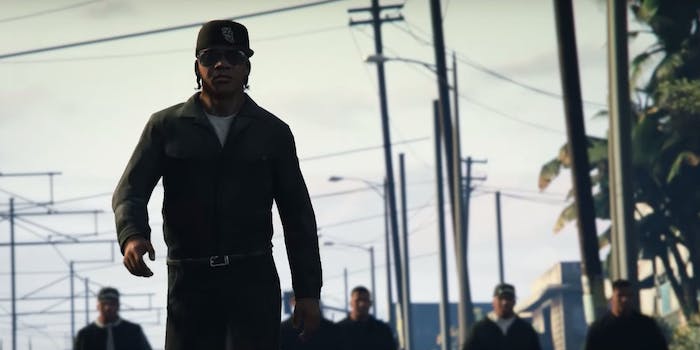 This jam never gets old.

YouTuber AnimalRobot has shown yet again how the Rockstar Editor in GTA V is such a versatile tool for creating machinima, including music videos. His tribute to the original N.W.A. music video comes hot on the heels of a huge opening weekend for docudrama Straight Outta Compton. The box office take was $56.1M, as reported by Variety.

AnimalRobot’s Straight Outta Compton GTAV Redux tribute is nothing close to a shot-by-shot remake of the original video, but it does have all the right attitude.

The original video, directed by Rupert Wainwright, premiered on MTV in May 1989 and showcased the blunt, in-your-face appeal that N.W.A. used to inspire the birth of gangsta rap, and the entire West Coast hip-hop scene.

AnimalRobot specializes in mashing up hip-hop tracks with footage from television shows, to hilarious effect. He features work from The Notorious B.I.G., Eminem, and BustaRhymes on his YouTube channel.