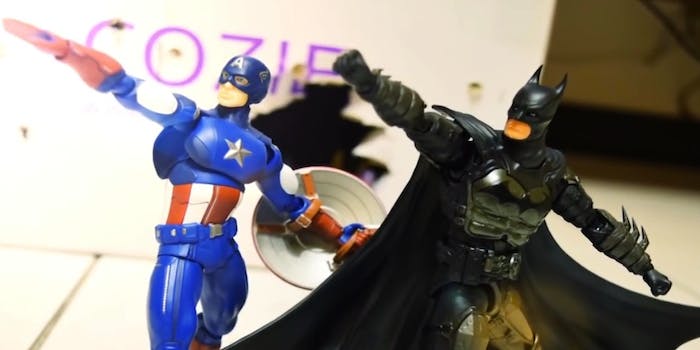 Long-time comics foes are joined by some familiar faces in this fan-created fight.

Batman and the Joker have gone head to head numerous times over the years, but the battle depicted by one YouTube user packs some extra punch.

The latest stop motion video from counter656 begins by following a fight between the DC Comics characters that might look like any other—until things take a turn for the worse for the Joker and he calls in some Gundams for help! Then Batman enlists a certain patriotic Marvel superhero to join the fight.

The video clearly took a lot of hard work to create. According to the description, the four-minute film used about 3,500 pictures and its production took 20 days.

This isn’t the first time counter656 has worked in the realm of stop motion animation. He’s made a number of other videos that you can find on his YouTube channel.