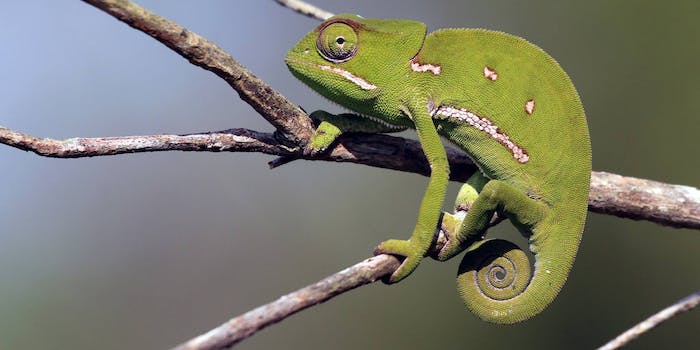 All the better to catch you with, my dear.

Though they’re known for their color-changey skin, chameleons have a lot more super-cool features for your average bio-nerd. Their toes are opposed, making them awesome for both gripping tree branches and looking creepy-cool. They can move their eyes independently of one another.

And now, scientists know, their tongues shoot out at near-breakneck speeds and have super-sticky saliva at the end to catch prey.

Researchers at the Université de Mons and the Université libre de Bruxelles came together to see how the chameleon pulls it off. They already know that, depending on the species, chameleons have tongues between one to two times their body length and can shoot out at accelerations between 300-1,500 meters per second squared. To put that in perspective, that’s way faster than the Falcon 9 rocket, but way slower than a bullet.

But all that ballistic power is worth nothing if it just launches the prey off their perch rather than catching it. The chameleon needs something that’s going to stick to the prey the moment it makes contact.

So, the researchers got a sample of chameleon saliva and compared it to human saliva. They found that it was roughly 400 times as viscous as human saliva—that’s roughly between the viscosity of castor oil and karo syrup. They published their results in Nature Physics.

This super-sticky saliva also allows the chameleon to capture prey that weigh up to 30 percent of its own mass, according to the study.

So now the real question is: How well does a chameleon tongue perform relative to Spider-Man’s webbing?

Thankfully Wired already figured some of this out. Spider-Man’s webs shoot out at a measly 24 meters per second (about 54 mph), according to its calculations. That said, considering Spider-Man can not only catch but slow down a car means he can handle “prey” far more than 30 percent of his body mass.

So, we’ll call this one a draw.