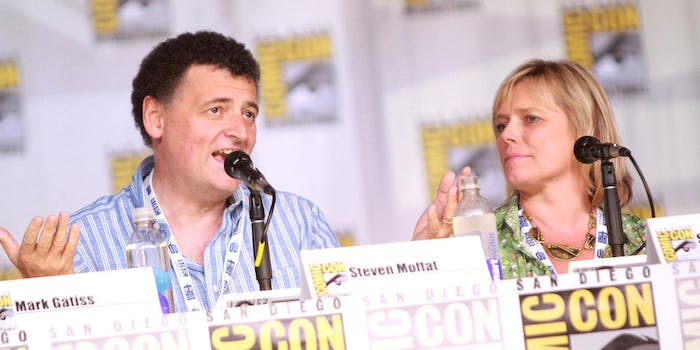 ‘Doctor Who’ showrunner Steven Moffat to step down after season 10

After six seasons, Steven Moffat is handing over the reins of the BBC's flagship show.

The rumors are true: Steven Moffat, the longtime showrunner of Doctor Who, will step down after season 10.

The Radio Times revealed late Friday that writer Chris Chibnall has been tapped to take over in 2018.

Fans will already recognize Chibnall from his seven episodes of Doctor Who and his work as the co-lead writer of Torchwood, but he’s best known for creating the smash-hit crime drama Broadchurch, starring David Tennant and Olivia Colman.

BCC1 controller Charlotte Moore told the Radio Times, “I have decided to schedule Steven’s big finale series in Spring 2017.” So it looks like we’ll only get one new episode of Doctor Who this year: the 2016 Christmas special, which may introduce the Doctor’s new companion. Moffat will take a break for the rest of the year—presumably to focus on Sherlock’s fourth season—and then return for his last hurrah in 2017.

As the world’s longest running sci-fi show, Doctor Who relies on new blood to keep things fresh. So while we can’t predict how Chibnall’s tastes and personality may influence the show, we can be sure that he’ll make some changes. Russell T. Davies left his mark when he rebooted Doctor Who in 2005, and Steven Moffat’s time as showrunner will be remembered for its slick visuals, complicated plotlines, and international appeal—as well as its occasional moments of controversy.

Doctor Who fans will undoubtedly spend the next two years analyzing Chibnall’s back-catalog for clues about his style as a showrunner. Will he be influenced by his work in crime dramas like Broadchurch and Law & Order U.K.? How will his background as a playwright come into play? Of course, we still have an entire season of Moffat’s Doctor Who to go before Chibnall takes over—and knowing Steven Moffat, he’ll want to go out with a bang.