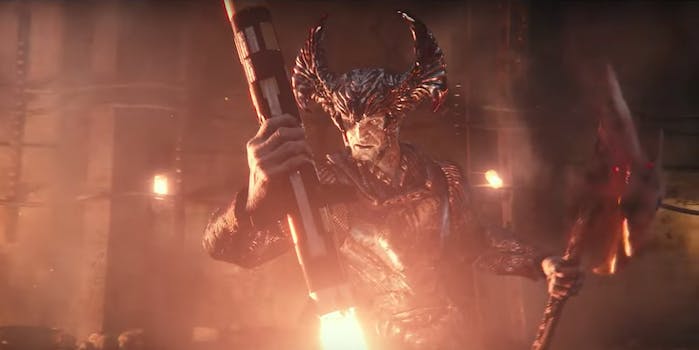 With Justice League mere days away, fans are approaching the big release with cautious optimism.

Warner Bros. is coming off a major win thanks to megahit Wonder Woman, and many fans hope the additions of Aquaman, The Flash, and fill-in director Joss Whedon will elevate Justice League above its critically panned predecessor, Batman v Superman.

While we don’t yet know if it will succeed, we can at least answer some of your looming questions about the film’s villain, Steppenwolf. This ancient, militaristic alien arrives on the big screen for the first time in Justice League, played by Ciarán Hinds (Munich, Frozen).

7 things you should know about DC’s Steppenwolf

1) Steppenwolf was created by a comics legend

2) Steppenwolf is a skilled field general

Steppenwolf, who has nothing to do with the Chicago Theatre company or rock band, is actually pretty badass in the grand scheme of things. He’s a proven master of warfare who isn’t afraid to engage in single combat when the time is right. When he isn’t down in the trenches himself, he’s often found giving orders to an army of alien paademon troops from his hover bike while armed with a giant ax or sword.

3) Steppenwolf is related to another DC comics villain

It’s no surprise that the DC Extended Universe is working its way up to the introduction of Darkseid, one of DC Comics’ biggest villains. If you were wondering how Justice League will get us there, it’s pretty simple: Steppenwolf is Darkseid’s uncle. While Darkseid is the ruler of Apokolips, their home planet, Steppenwolf isn’t far behind in the hierarchy.

4) Steppenwolf has had a few makeovers

Steppenwolf’s appearance has changed pretty drastically over the years. In Superman: The Animated Series and Batman the Brave and the Bold, he looks more like a Robin Hood enthusiast than a war hero. In a Batman v Superman bonus scene, he looks like a freak science experiment gone terribly wrong. But in a clip released by Warner Bros., now he looks like a serious god of war.

5) Steppenwolf is probably after Mother Boxes

Whether we’re talking magical stones, ancient artifacts, or briefcases full of cash, superhero movies typically have some kind of Mcguffin to create a conflict. In the DCEU, it appears that the items everyone will be fighting over are Mother Boxes. These are sentient super-computers that are so advanced that the least impressive thing they can do is open portals to different galaxies. All clues so far suggest that this is what brings Steppenwolf to Earth this time around.

6) Steppenwolf has beaten some of DC’s biggest heroes

The general of an army of flying demons is no slouch. Just because he’s not the head honcho doesn’t mean he shouldn’t be taken seriously. After the Flashpoint event shook up DC continuity, Steppenwolf managed to escape to an alternate version of Earth where he successfully killed its versions of Batman, Wonder Woman and, yes, even Superman.

7) Steppenwolf loses to Batman… a lot

Unfortunately for him—but fortunately for everyone else—Steppenwolf has a pretty poor success rate. In one instance, he actually lost a fight to Batman, who has no superpowers outside of wealth and intelligence, and Jonah Hex, who also has no powers. He also lost to Earth 1’s Batman after he tried taking out the big three again. For someone who comes from a comic with the word “Gods” in the title, he sure takes a lot of L’s.