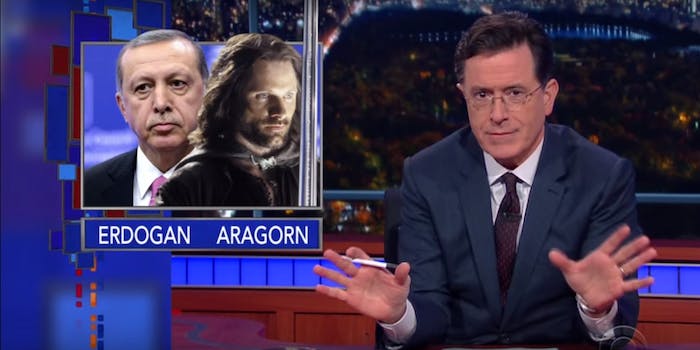 How is this even a real court case?

When the news broke that the Turkish government was prosecuting someone for comparing President Tayyip Erdogan to Gollum, it was only a matter of time before Lord of the Rings super-fan Stephen Colbert got involved.

In Turkey, it’s a crime to insult the president. After sharing memes comparing Erdogan’s face to photos of Gollum, Turkish doctor Bilgin Çiftçi was fired from his job and later taken to court. To match the bizarre nature of the case, Çiftçi’s lawyer mounted a unique defense: He claims that the photos shared by his client did not amount to a negative comparison because they didn’t depict a bad character.

Even Lord of the Rings director Peter Jackson threw his hat into the ring, pointing out that the memes show the sweet-hearted character Smeagol instead of Gollum. But Colbert wasn’t willing to let the case rest at that. As one of the world’s foremost Tolkien experts (according to him, anyway), he used his TV show as a platform to mount a painstakingly researched defense.

Apart from the ridiculousness of the whole Gollum thing, this is one of the most impressive examples of the Streisand Effect that we’ve seen in years. By taking this one Turkish citizen to court, Erdogan has guaranteed that people across the world will be laughing at his Gollum memes.

Or, you know, his Smeagol memes. Let the courts decide.