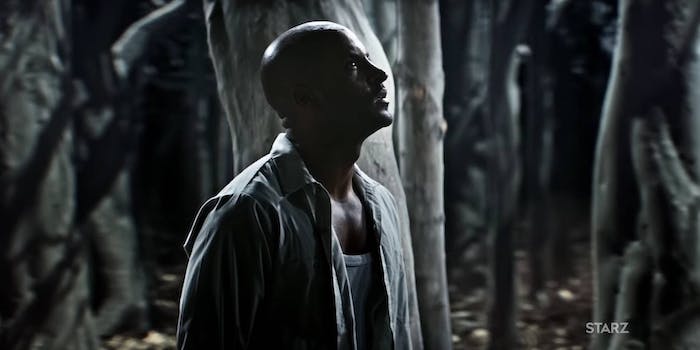 The hotly anticipated Starz series will debut next year.

The SDCC weekend hype for Starz’s American Gods series has seemingly been bookended by casting announcements. During a Comic-Con panel about the acclaimed Neil Gaiman novel-turned-show, it was announced that Kristin Chenoweth would play Easter, the old goddess of dawn.

SURPRISE!!! So excited to join the cast of @AmericanGodsSTZ as the goddess Easter! 🐰 #SDCC #SDCC2016 #AmericanGodshttps://t.co/RTEg7Z357J

A first look at the series, which is set to premiere next year, followed soon after.

With Ricky Whittle starring as Shadow Moon, Ian McShane as the modern-day Odin known as Mr. Wednesday, and Emily Browning playing the role of Laura Moon, it appeared as if the star power couldn’t shine any brighter.

That is, until Gillian Anderson’s Media emerged from the shadows. Though the casting announcement was made over month ago, fans had yet to get a full glimpse of the new goddess of television hellbent on luring Shadow away from Mr. Wednesday.

In keeping with the comics, showrunner Bryan Fuller chose a Marilyn Monroe aesthetic for Anderson. The actress may not have made it to San Diego for Comic-Con but Fuller was quick to comfort fans.

WE ARE MISSING @GillianA AT @AmericanGodsSTZ #SDCC2016, BUT SHE IS #MEDIA SO SHE IS ALL AROUND US. @neilhimself https://t.co/gNI9FeObDy