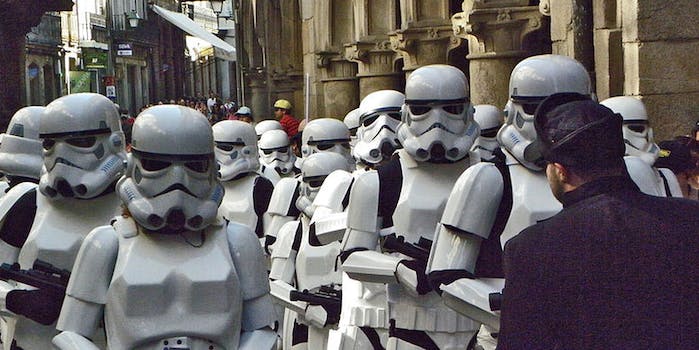 As ‘Star Wars’ filming wraps, J.J. Abrams thanks his crew

Star Wars VII just wrapped, which means we’re edging ever closer to seeing the first new live-action Star Wars in a decade. All we have to do now is wait 14 months for them to slap some CGI and other post-production effects on that thing!

The cast and crew celebrated the end of principal photography with a party, where producers J.J. Abrams, Kathleen Kennedy, and Bryan Burke shared a thank you note that has inevitably leaked online.

Filming of Star Wars Episode VII has officially wrapped on Oct 31 via @AdmiralPellaeon. Thank you Card from J.J. pic.twitter.com/SoPaw2Hipd

“It is a true honor and absolute joy to come to set every day and work alongside each of you,” the letter reads. “Your professionalism, passion, and patience is more deeply appreciated than we could ever express. From the deserts of Abu Dhabi, to the Forest of Dean, to the stages of Pinewood, you have risen to every challenge and been as wonderfully kind as you are brilliantly talented. Our ambition here is large, of course, and it must be: we are here to make a film that entertains millions of people, of all ages, for generations.”

A few photos have also emerged from the wrap party, although the most charming by far were the selfies from John Boyega. The Attack The Block actor (and soon-to-be Star Wars icon) has an Instagram account that is surely a must-follow for any fans of the upcoming movie.

Another from the wrap party, with Chloe Bruce pic.twitter.com/CZfMtVTXaR

A photo posted by @jboyega on

What looks like Boyega’s co-star Daisy Ridley (or a very good doppelganger) can be seen dancing in the background of this one.

A video posted by @jboyega on

So far Disney and the Star Wars media empire have kept a relatively tight lid on production details, so J.J. Abrams will be breathing a sigh of relief that he no longer has to worry about fans using drones to spy on the film sets. With principal photography over, fans will have less of a chance at glimpsing new characters and costumes—although we should finally start seeing some more official info over the next few months.

Photo via amaianos/Wikimedia, CC BY 2.0