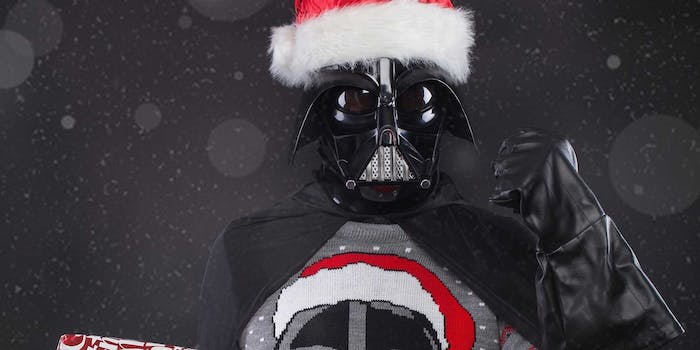 Tis’ the season to visit family, celebrate with friends, and wear an ugly holiday sweater! It’s hard to believe that at one time these sweaters were an unwanted gift, because these days wearing one has become a yearly tradition. The concept has become popular enough to inspire a range of intentionally “ugly” designs—and there are plenty of ugly sweaters with a geeky twist.

Almost no fandom is safe from being transformed into the ugly sweater style, including Star Wars. Jedi, Sith, and droids have all found their place on the warm, overly bright, boldly patterned tops. With The Force Awakens only a few weeks away, there’s probably no better time to take the plunge and embrace wearing an ugly sweater during the holidays. Here are eight sweaters Star Wars fans should check out! 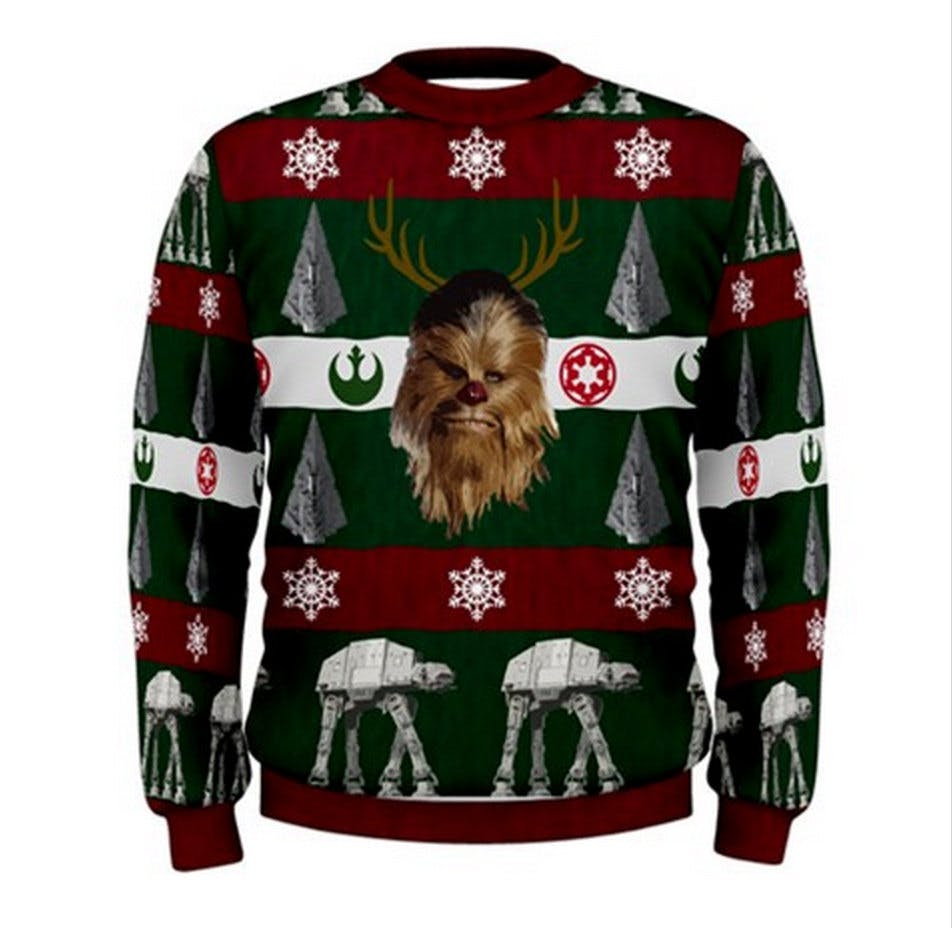 Whether or not Chewbacca actually has a shiny nose, there’s no doubt he’ll go down in history  helping the Rebels fight the Empire have helped him go down in history. Remember his contributions with this fun (and truly ugly) sweatshirt this holiday season. We’re sure the AT-ATs and Star Destroyers won’t shout in glee for Chewbacca, but that doesn’t mean you can’t while wearing it! 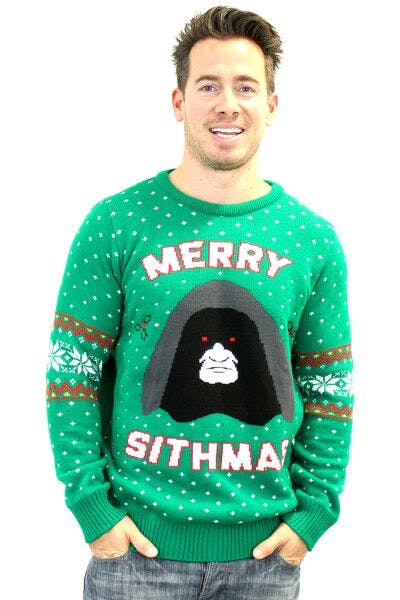 Are you dreaming of a dark-side Sith-Mas? If you want to keep out the chill by feeling warm and cozy in the dark side, then this bright green sweater showing the likeness of Emperor Palpatine could be a perfect fit. You can spread the Sith-Mass joy to all of your friends even if the Sith Lord would probably be singing more about galactic domination than universal peace. 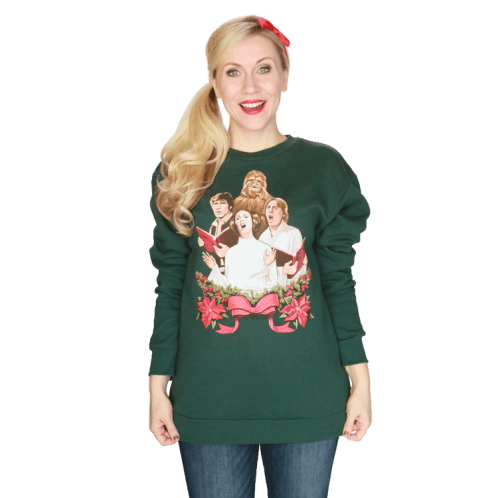 Our Star Wars favorites come a-carolling! Whether you’re singing songs around the neighborhood or just want to break into tune during your holiday party, get some help with this pullover featuring the original trilogy’s heroes getting into the holiday spirit—though some seem to be letting loose more than others! We’re guessing Han is faking it. 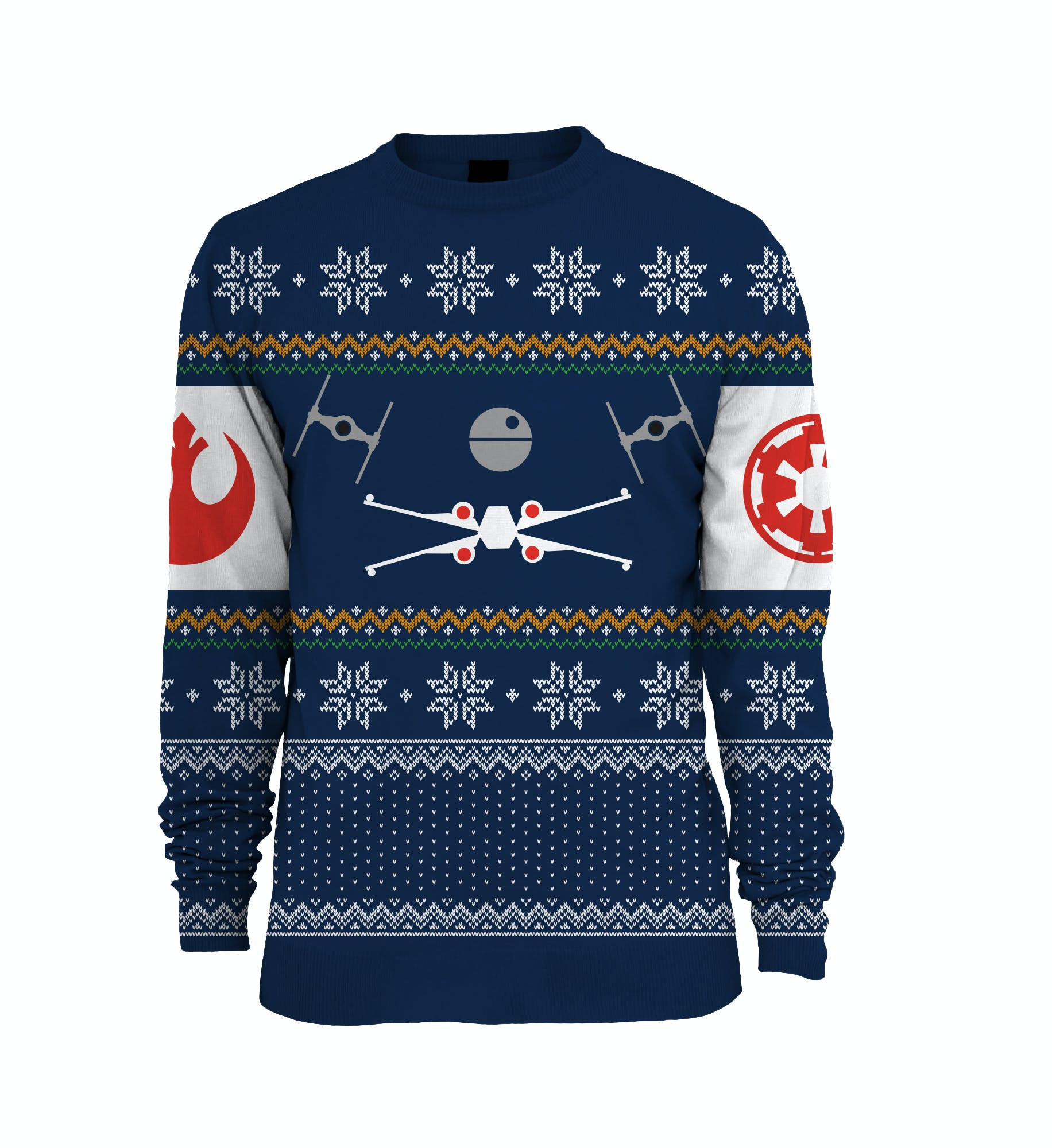 Feel like you’re a part of the epic battle between the Empire and Rebel Alliance when wearing this jumper. Featuring an X-Wing fighter facing off against two TIEs with yonder Death Star in the distance, it’ll surely be a conversation starter no matter who you meet this holiday season. 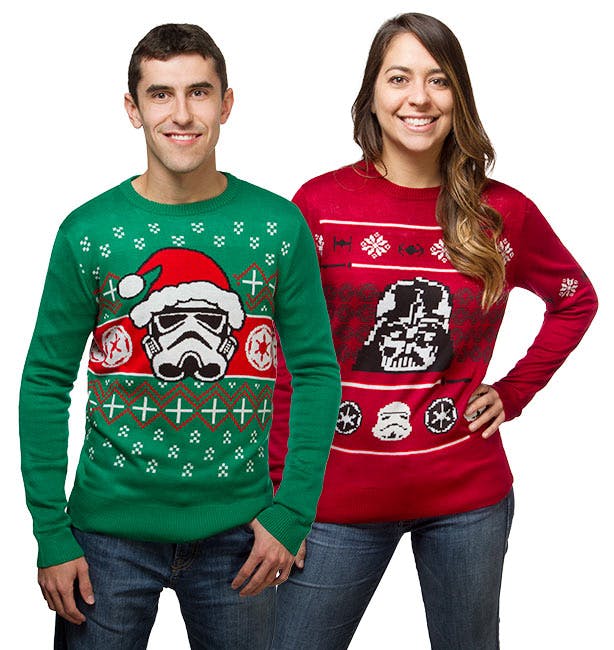 Embrace your destiny and become a festive Imperial with one of these two exclusive holiday sweaters. You can choose between the Darth Vader sweater, which shows him surrounded by symbols of holiday cheer (and destruction), or a cheery Stormtrooper wearing a Santa hat with more signs of the season. We bet these would have been a hit at any holiday party in the Empire. Can you imagine Darth Vader swooping to the Death Star in an AT-AT-drawn space sleigh? We’re not sure people would look forward to whatever gifts he’s bringing, but at least this sweater will let you bring the gift of Star Wars cheer wherever you wear it. 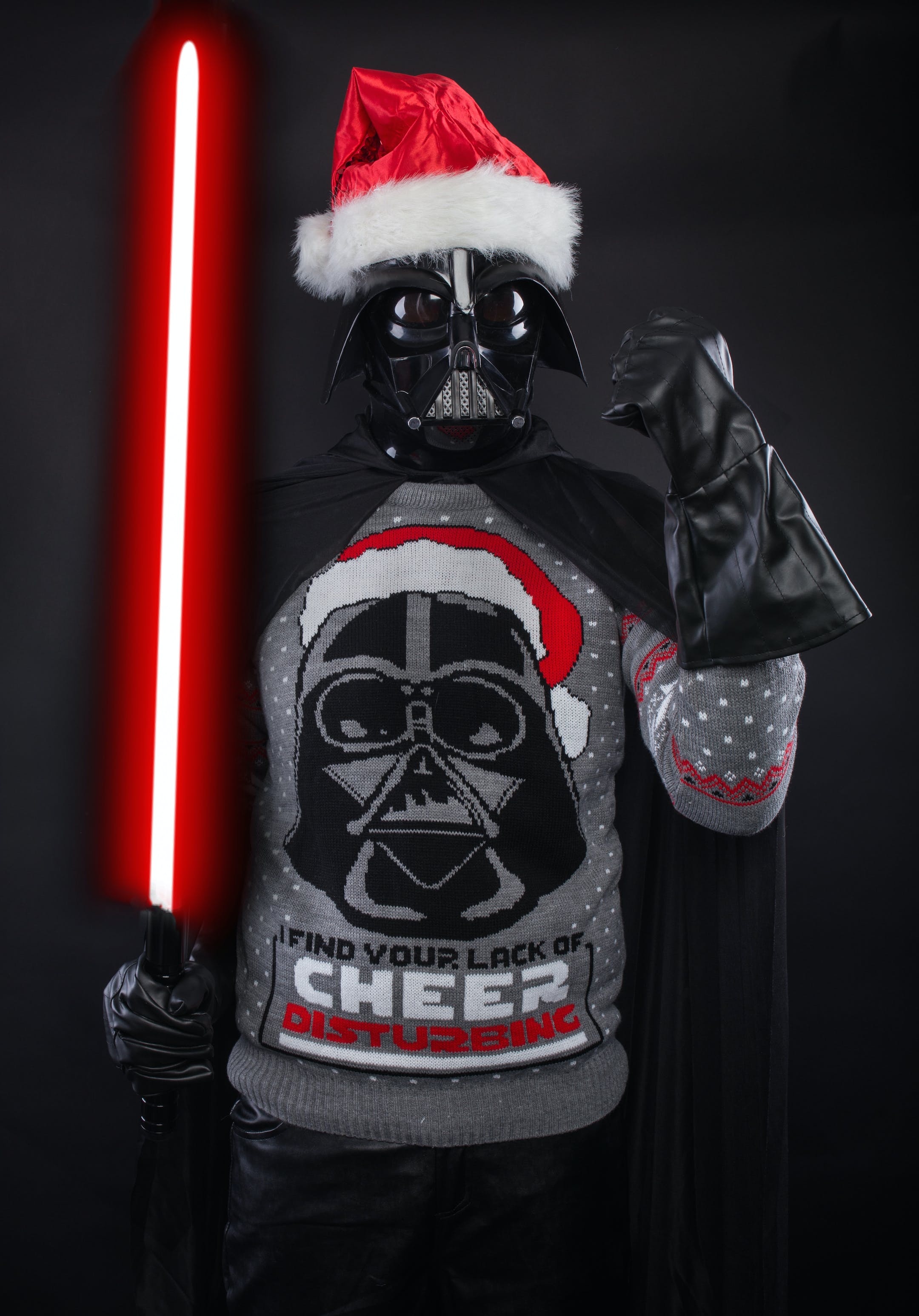 Darth Vader’s been said to find a lot of things disturbing over the years, but this ugly sweater’s version of the classic line complete with Vader in a Santa hat is just a must-have for your ugly sweater collection. Imagine all of the people you can walk up to and greet in a fake Darth Vader voice while wearing it! We’re almost positive it would make you the hit of your holiday party. Who wouldn’t want Yoda placing gifts under their tree this year? Imagine the mysteries of the Force and other presents you might receive. This sweater will let you bring a little bit of that mysterious and wise Yoda charm with you throughout the holidays. 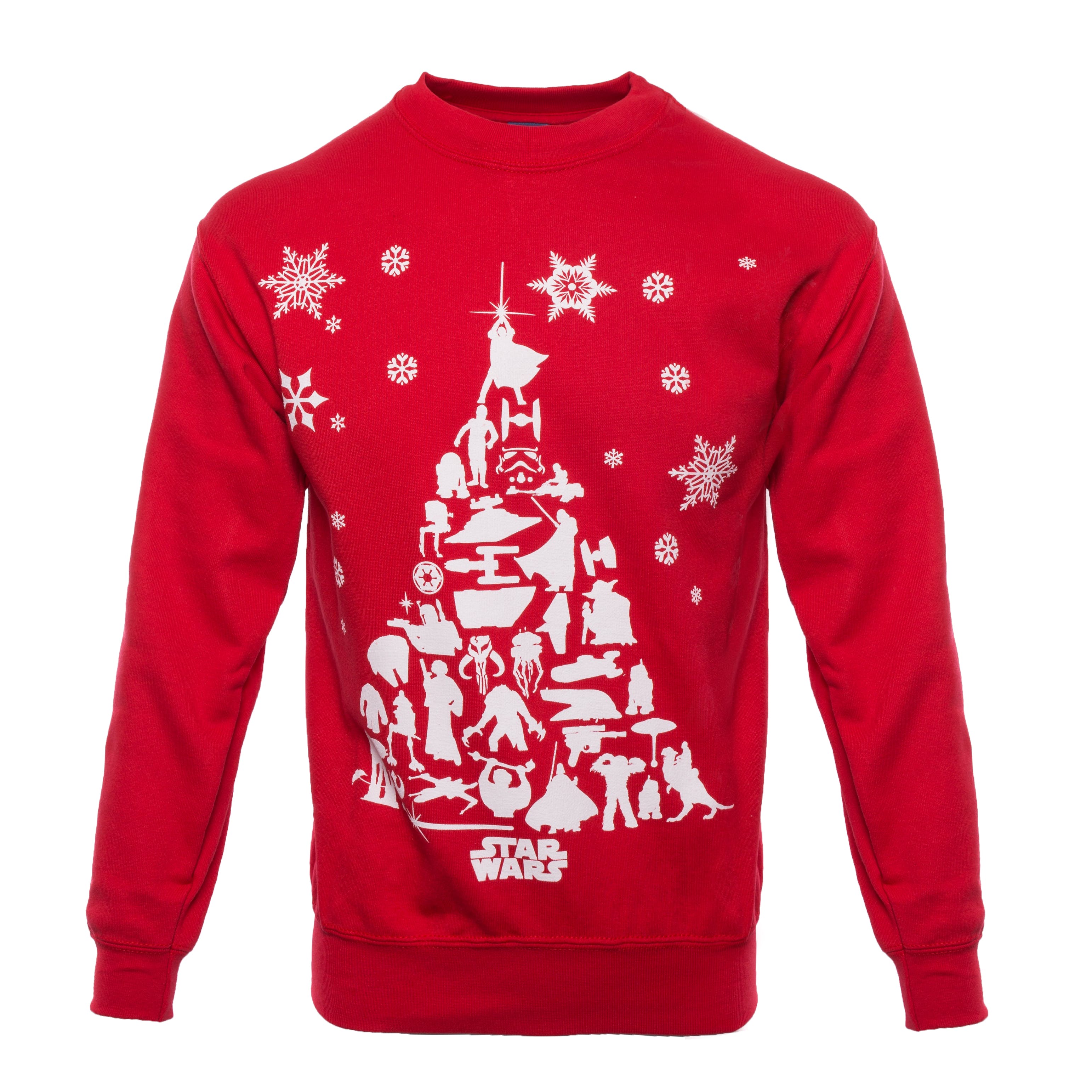 On the first day of Christmas, give your true love Star Wars on an ugly sweater! The Christmas tree design on this top showcases a number of different characters, symbols, vehicles, and more from the franchise. Replacing the tree’s star is the bright, shining light of Luke’s lightsaber from the original Star Wars movie poster.