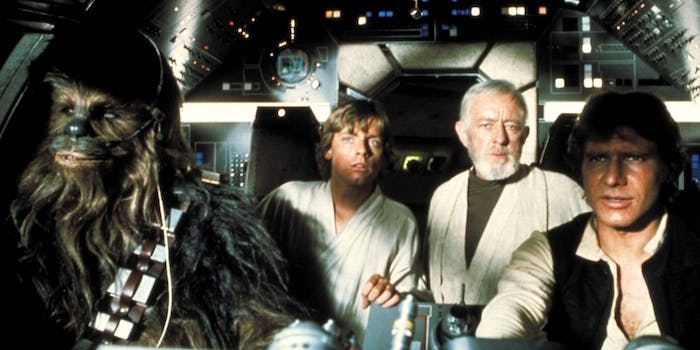 Now we just need the scoop on the story.

The first of multiple standalone Star Wars movies in development will arrive in theaters December 16, 2016. Gareth Edwards, known for his critically acclaimed work on his debut film, Monsters, will direct. You might recognize his name from the recent Godzilla reboot. Gary Whitta will write the screenplay.

“Ever since I saw Star Wars I knew exactly what I wanted to do for the rest of my life—join the Rebel Alliance! I could not be more excited (and) honored to go on this mission with Lucasfilm,” Edwards said in a statement.

This won’t be the first screenplay for Whitta, whose screenwriting credits include The Book of Eli. He’s also well-known in the video game community as a former game journalist, editor-in-chief of PC Gamer magazine, and part of the team behind Telltale Games’ The Walking Dead.

“From the moment I first saw the original movie as a wide-eyed kid, Star Wars has been the single most profound inspiration to my imagination and to my career as a writer,” Whitta said in the same statement. “It is deeply special to me, so to be given the opportunity to contribute to its ongoing legacy, especially in collaboration with a filmmaker as talented as Gareth, is literally a dream come true. I’m still pinching myself.”

The fandom was excited to finally get some details on the spinoffs, sharing their thoughts and continued speculation on what the film will be about on Twitter.

The fact that @garywhitta is screenwriting the first @starwars standalone film has me incredibly, if a bit surprised-ly, excited. #bobafett?

I’m way more excited about that standalone Star Wars film than the trilogy.

Whether or not the plot of this film will focus on a young Han Solo or fan-favorite character Boba Fett—two possible focuses for the spinoffs revealed in 2013—remains to be seen. Now that more details have been revealed though, it might not be long until fans find out what story beyond the trilogy Edwards and Whitta will be tackling together.