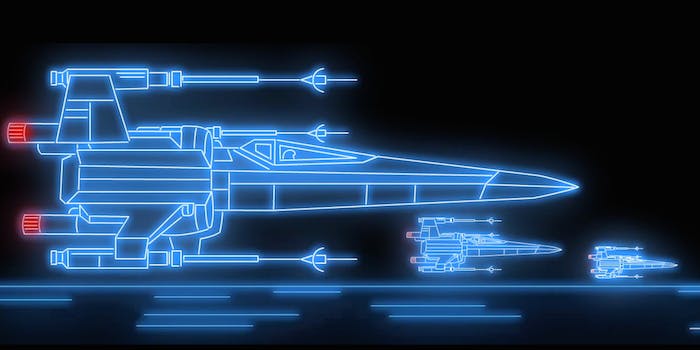 ‘Star Wars: The Force Awakens’ trailer gets a neon makeover

The galaxy far, far away goes neon in this retro remake.

The Star Wars: The Force Awakens teaser trailer has inspired a range of impressive fan remixes, but this interpretation is unlike any of the ones we’ve seen before.

A digital artist known as Neonardo has recreated the entire trailer using neon animation. The neon gives the galaxy far, far away a Tron feel, as lightsabers and laser cannons are no longer the only things to light up in this now-colorful world. All of the scenes are spot-on, which is impressive since they were only constructed out of neon lines.

Star Wars isn’t the only franchise to receive the neon treatment from Neonardo. His Tumblr is full of neon GIFs for Batman, Jurassic Park, Guardians of the Galaxy, and more.

You can see more of his work on Tumblr and Twitter.