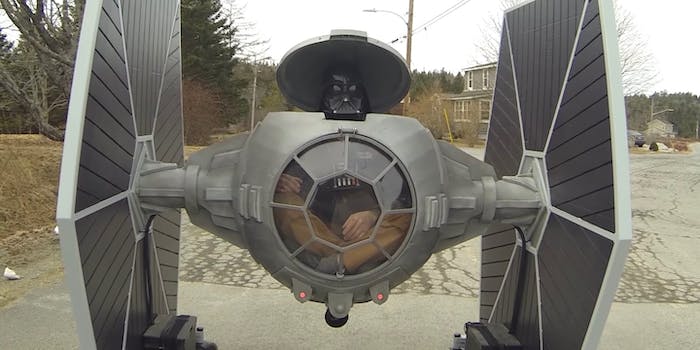 It's ready to take down those Rebels.

We’ve seen a number of Star Wars vehicles designed for children over the years, but the latest to enter the battle is finally large enough for adult dark lords of the Sith to ride.

In a behind-the-scenes video, Allan Carver revealed what went into creating a remote-controlled, life-size TIE fighter using multiple types of foam, upcycled electric wheelchair motors, and a Sabertooth dual-motor driver. He based the design on a combination of a classic Kenner toy and a newer version, and it even includes audio made by TIE fighters. And at one-third the scale of a real TIE fighter, it’s still capable of fitting a pilot—albeit in a much more cramped space than Darth Vader or Imperial fighters ever had to fly in.

With a maximum speed of six miles per hour, it won’t be making the Kessel Run anytime soon, but it just might be enough to inject a bit of fear and awe into your friends because historically speaking, having a TIE fighter on your tail has rarely been a good thing.