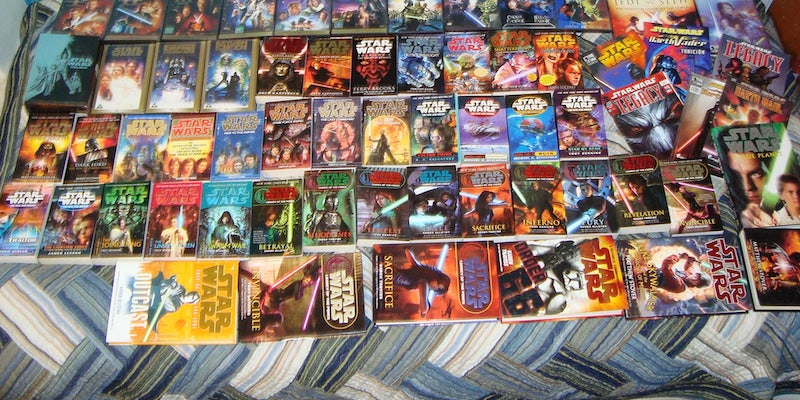 You have a lot of reading to do.

Lucasfilm will release several dozen books across a range of formats in the leadup to Star Wars: The Force Awakens.

The project will span multiple publishers and will be called Journey to Star Wars: The Force Awakens, according to Entertainment Weekly, which exclusively revealed the news.

Del Rey Books, Lucasfilm’s longtime adult-fiction licensee, will publish Star Wars: Aftermath, which sounds like a post-Return of the Jedi epilogue, according to EW. Marvel Comics, which recently reacquired the Star Wars license from Dark Horse, will publish a main Journey to the Force Awakens series along with another “preview story told from C-3PO’s perspective.”

To help acclimate new Star Wars fans to the characters who will feature prominently in The Force Awakens, Lucasfilm will also publish original stories featuring Luke Skywalker, Han Solo, and Leia Organa. Moving Target by Cecil Castellucci will follow Leia, The Weapon of a Jedi by Jason Fry will follow Luke, and Smuggler’s Run by Greg Rucka will follow Han. EW mentioned another novel, Lost Stars by Claudia Gray, but did not say who it would feature.

There will also be other novels telling the story of the three original trilogy films “from the perspective of various supporting characters,” EW said.

“The Force Awakens is an extraordinarily, heavily guarded storyline,” said Disney Publishing Worldwide Executive Vice President Andrew Sugerman. “To track it, a lot of top-secret meetings were happening up in San Francisco as we worked through this program.”

To help coordinate these stories, Lucasfilm maintains a small team called the Lucasfilm Story Group. Its members advise the creative teams of every Star Wars project, from The Force Awakens to Marvel’s Star Wars writers and illustrators. Because of this collaboration, the new books in the Journey to The Force Awakens publishing program will be able to drop hints of what to expect in the new movie.

“The partnership with the story group and the editorial team always had to be true to the sanctity of the film while making sure that we find these moments to introduce hints, clues, and puzzle pieces,” Sugerman told EW. “Without revealing what those pieces are, it will just allow readers to speculate about the new film: What could a location mean, or what could a character mean?”