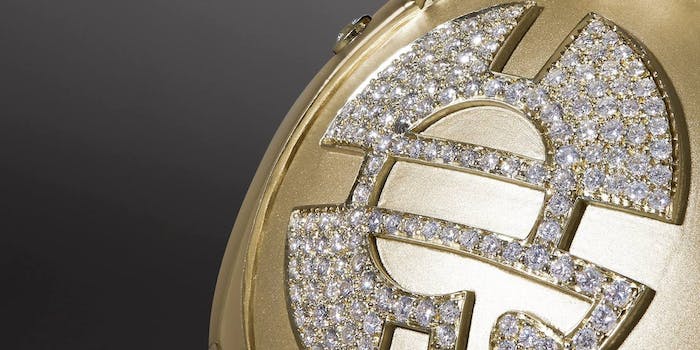 The sparkly droid will be auctioned off to benefit charity.

The unique and adorable design of BB-8 immediately caught the eyes of fans when the Star Wars: The Force Awakens droid first appeared. Now BB-8 will catch your eye for a whole different reason, thanks to a sparkly makeover the droid received from a partnership between Kay Jewelers and Disney Consumer Products.

Glamour exclusively revealed a version of the droid created in 18 carats of diamonds and 18 carat yellow gold that is estimated to be worth $135,000. According to Glamour, it stands at only 4.25 inches tall, weighs a little more than one and a half pounds, and took more than 600 hours to create.

The recreation of the droid will appear at the Force 4 Fashion event in New York City Wednesday night. The event will also feature the 10 outfits designed for the charity program including a Captain Phasma dress. This is not the first time Kay Jewelers entered the galaxy far, far away. On Force Friday the company revealed a Star Wars bracelet and charms, and since then it appears to have added even more jewelry options.

Can you guess who will be rolling down the red carpet at tomorrow’s #StarWars #Force4Fashion event? pic.twitter.com/uV6qEkkeko

The best part though is that this little BB-8 will help make a difference. It will be auctioned off and the proceeds will support St. Jude Children’s Research Hospital, a cause worthy of BB-8 and Star Wars fans everywhere.