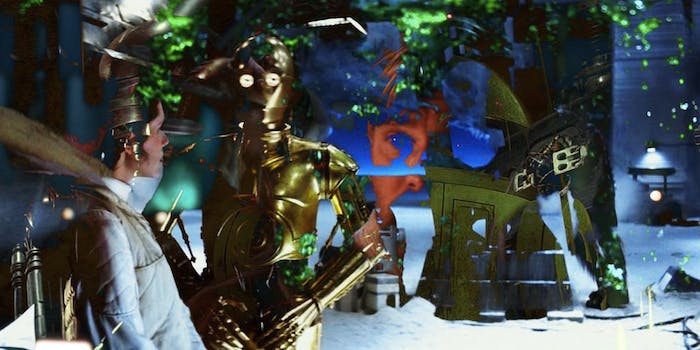 May the Force (and your patience) be with you.

Fulfilling a need that you didn’t even know you had, YouTube user Maurcs has edited together every single Star Wars movie so that they play on top of one another as a single video.

At two hours and 22 minutes long, with all six episodes of the saga blended together as one, it’s a little hard to watch. But that won’t stop you from trying, will it?

Lots of Star Wars fans would rather not talk about Episodes I through III. If you’re one of those purists, you’ll be glad to know that this trippy video makes use of the Harmy Despecialized Editions of Episodes IV through VI. These are high-definition fan-made reconstructions of the movies that aim to replicate the original films as they were shown in theater more than 30 years ago. (Much to some fans’ chagrin, George Lucas changed a few things in subsequent re-releases.) This six-in-one creation, however, is too far-out to ever appear in theaters.

Please enjoy all of the Star Wars movies at once, if you think your brain can handle it.