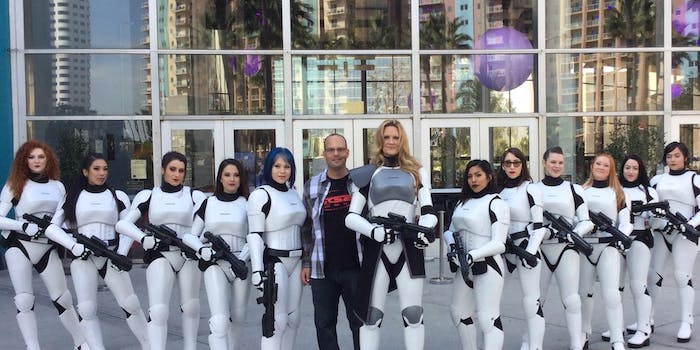 The armor created by Kevin Weir was inspired by different elements from the ‘Star Wars’ universe.

Let’s face it, ladies: Stormtrooper armor is awesome, but trying to get it to fit usually requires some serious modifications. That’s why this new way for women cosplayers to show their allegiance to the Empire is so exciting.

“I wanted to go beyond the boundaries of creating a character that’s been seen before, but at the same time try to encapsulate all those different elements from The Clone Wars, Ralph McQuarrie, The Force Awakens, [and] the classic stormtrooper,” Weir told the Daily Dot. “I just kind of let my mind relax and have fun with the sculpt.”

The kit doesn’t include items like boots or blasters, which need to be purchased separately. A helmet is also not included, though Weir is working on one that he hopes to start offering by mid-April. Like the armor, it’s a mashup of more than one inspiration.

One of the women who helped debut the armor at Long Beach Comic Expo was Amanda Ward, Star Wars fan and administrator of the website Making Star Wars. She wrote about the experience on Making Star Wars, and quickly caught the attention of several geek news outlets.

Ward told the Daily Dot she first heard about the armor from her friends Sal and Liz Perales. The two had previously worked with Weir, and Liz Perales owns the FEMTK kit. They told her they were looking for as many women as possible to debut the new armor and asked her to be a part of it. While Ward had never cosplayed before, hearing about the opportunity and Sal’s offer to help her put it together convinced her to give it a try. 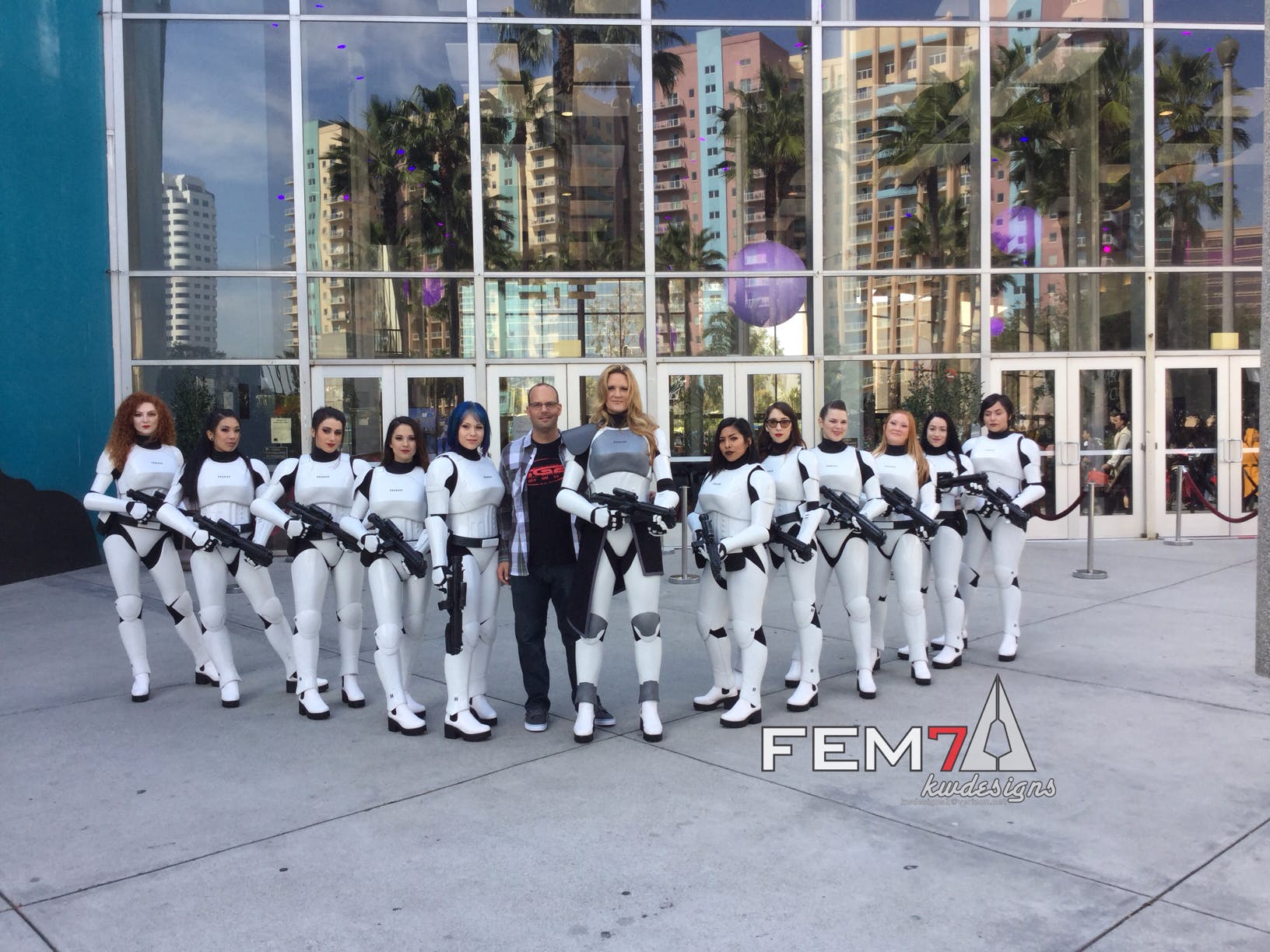 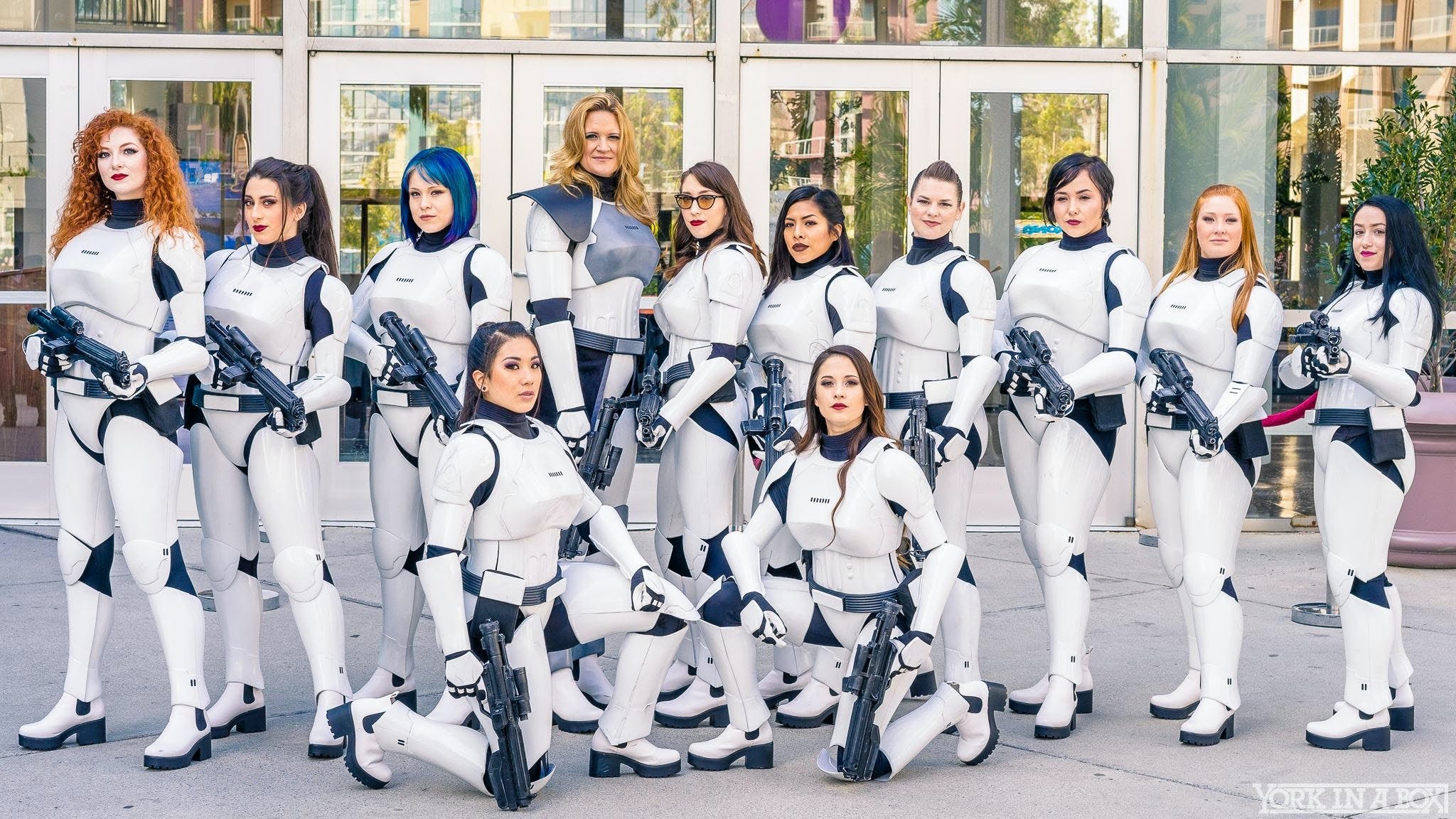 Ward called assembling the kit “a really exciting and full throttle experience” for her first cosplay. That’s because kits don’t just have pieces that come out of the box ready to wear. The included pieces need to be cut before being put together. Weir has a website called Imperial Surplus that shows how some of his armor can be assembled.

“Every costume is assembled a little bit differently, but we have some of the same principles involved,” Weir said.

Weir recommends having someone with you that can help when you’re working on assembling your kit. For the FEM7, Weir and the women worked on assembling the kit for Long Beach Comic Expo for about two weeks, though some were able to assemble it in only a few days.

“Some of these girls had never assembled any of this hard-armored type stuff before, but there was a group of us there with them together helping them along and so forth,” Weir said. “Literally in 40 to 60 hours you should be able to have this completely assembled.”

In addition to assembly, the armor also required painting for the look Weir was going for. 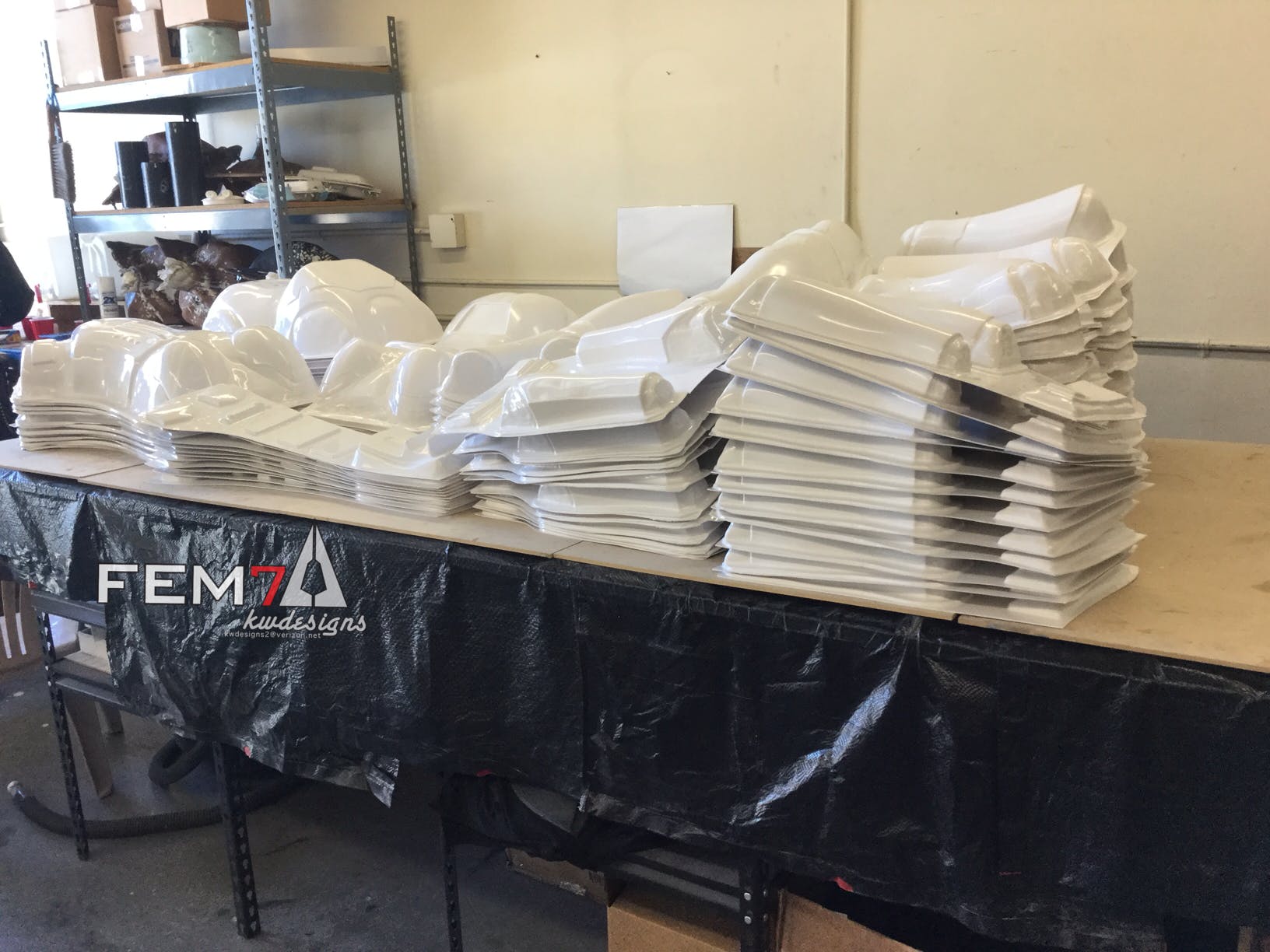 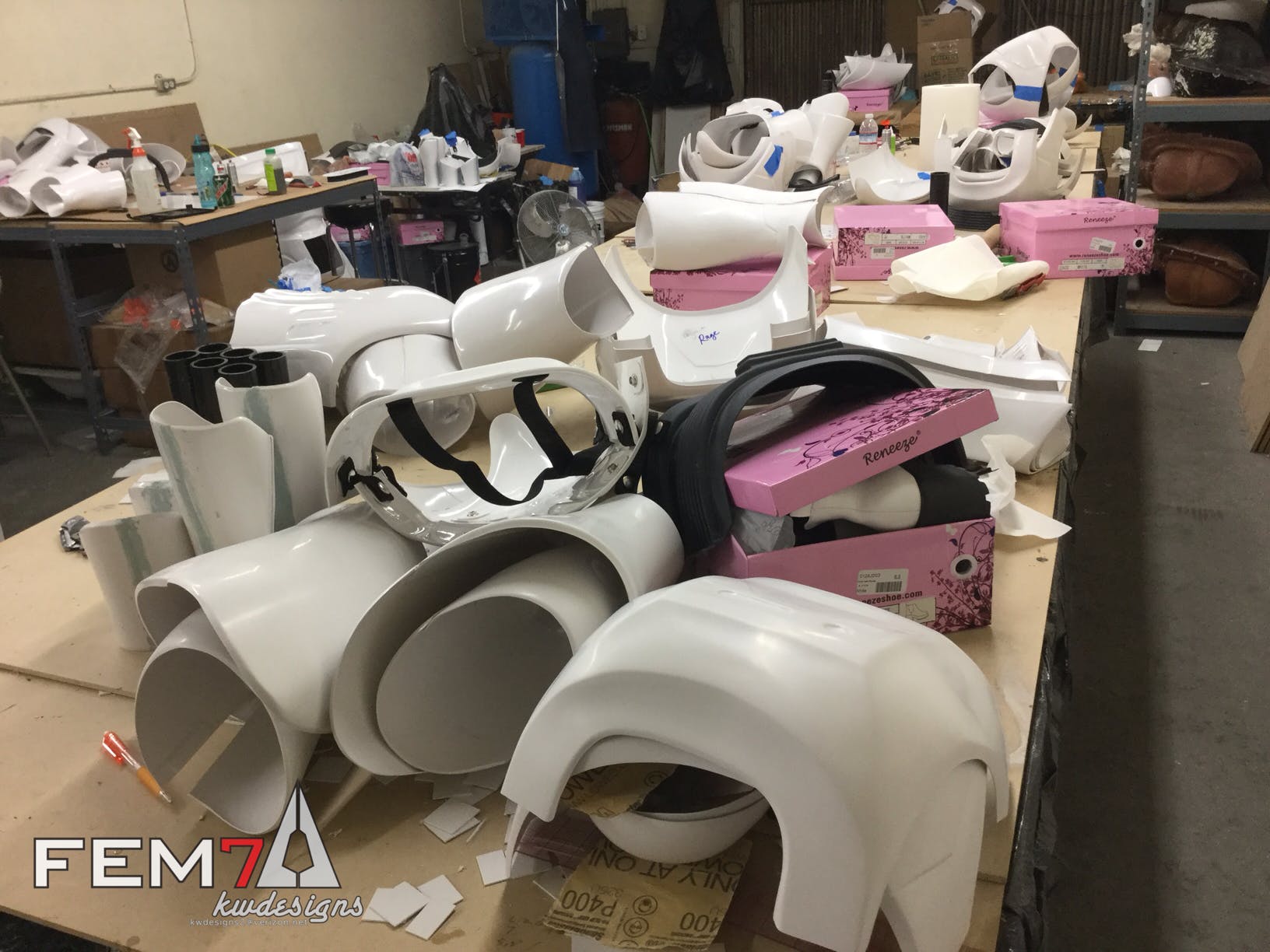 For Ward the time consideration made her apprehensive because she has a full-time job and two kids, but she said once she started and received help it wasn’t as bad as she thought. To her the most challenging part was cutting each piece out of their molds due to the thickness of the plastic and sizing everything.

When it came to wearing the armor, Ward said it wasn’t too uncomfortable and was lightweight so she could wear it for hours. It is still essentially body armor.

“Walking is a little bit awkward and you have to change the way that you stand and sitting is hard, but it’s kind of worth it because you get to wear this really cool armor,” Ward said.  “That was the funnest part for me, walking around knowing like ‘Wow, I look like a cool Star Wars character right now, this is the best.” 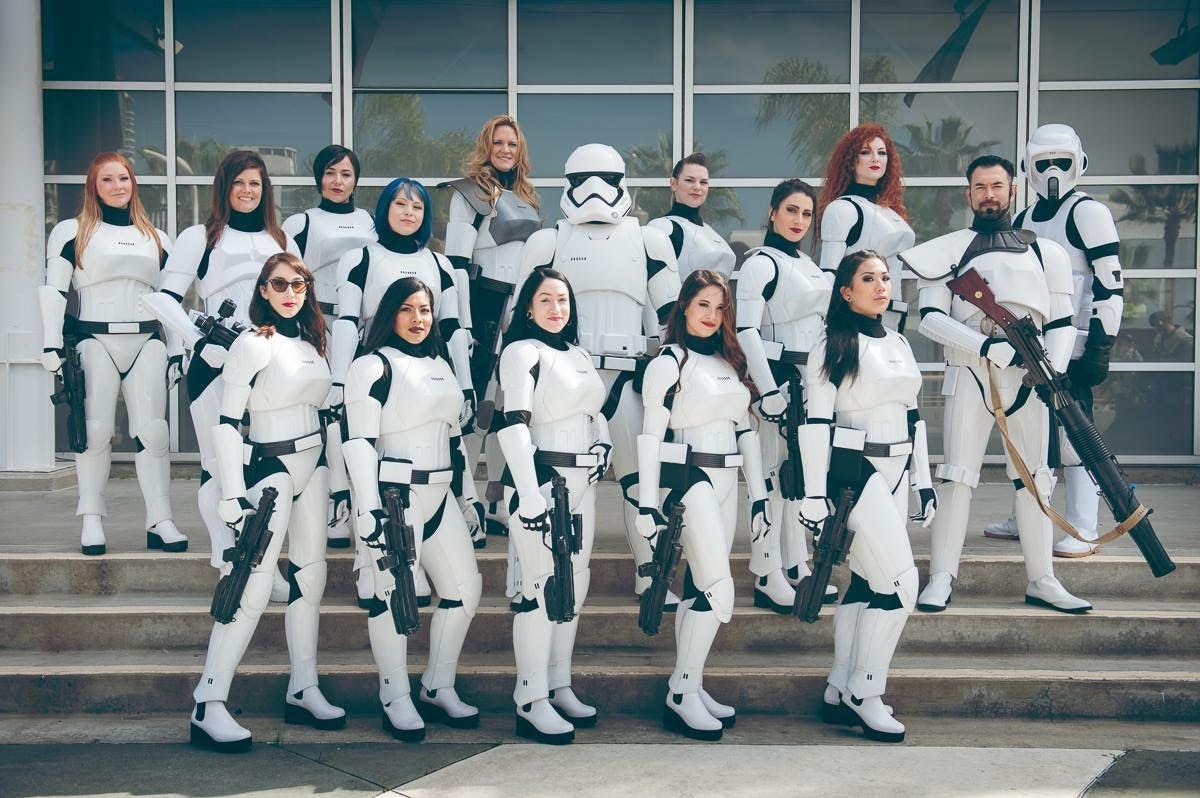 Ward also enjoyed being with such a large group of women to debut the armor and hanging out together with other stormtroopers.

“It was really fun to get to do this. When working at MakingStarWars.net I’m usually behind the scenes at cons working and not getting to enjoy it, so this was the best opportunity I’ve had to enjoy a convention and to just be a Star Wars fan,” she said.

Weir received help from his wife and connections in the community like Sal so the group included a variety of different cosplayers.

“I think this was good for this particular project because while looking at it it’s in the Star Wars universe, I really wanted to make this fit into a larger world in a sense that this can just be fun cosplay and have that Star Wars feel but let it eventually kind of grow and evolve into [the] individuality of the person who’s wearing it,” Weir said. “Maybe they want to kind of change it up and make it a little bit more their personality.”

The positive experience convinced Ward to consider trying other cosplay as well, though she said it would still be Star Wars. As for the armor, she will definitely wear it again and you might catch her and the other women at an upcoming convention.

“I think that we’re going to get even more girls together for probably WonderCon and definitely San Diego Comic-Con coming up this year,” she said. “People love to see stormtroopers in a big squad and marching around together and that was the funnest part, just seeing everybody pointing and following us as we went by.”

Anyone interested in ordering their own set of FEM7 armor from Weir can purchase the kit on sale until the end of March.