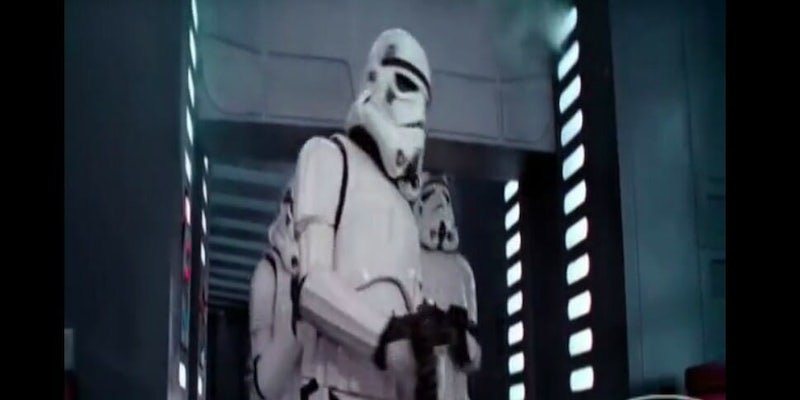 It all started with an upset stomach.

You know the moment in Star Wars when a stormtrooper bashes his head against a door ceiling and makes it look like he’s auditioning for a role in Spaceballs? This scene, to be exact.

The way actor Laurie Goode, the man in that stormtrooper suit 30 years ago, tells the story, he was having plenty of other problems the day that scene was shot.

“On the second day of filming, I developed an upset stomach. By mid-morning I had paid three to four visits to the loo/bathroom,” Goode told the Hollywood Reporter. “Having re-dressed myself and returned to the set, I felt the need to rush back to the gents’ toilets, but I was placed in [the] shot. On about the fourth take, as I shuffled along, I felt my stomach rumbling, and “Bang,” I hit my head. As I wasn’t moving too fast, it was more of a scuffed bash, so it didn’t hurt, but as no one shouted “Cut,” I thought the shot wasn’t wide enough for me to be in frame.”

Goode, of course, was wrong, leaving a nice little Easter egg for those Star Wars fans who love watching things that weren’t supposed to happen.

And when Goode first saw the film, he couldn’t believe that clip hadn’t ended up on the cutting-room floor. Instead, he’s now a part of the film’s lore—even if nobody believes him.

“The first convention I attended, I think in 2006, I told one of the organizers that I was the stormtrooper who banged his head, thinking he would say, ‘Great—that’s fantastic!’ But he just shrugged his shoulders and told me he had heard that from so many others, adding [that] everyone was banging their heads,” Goode said. “So, as I had no way of proving it, I thought I’d better keep quiet about it. As time marched on, people started telling me that [the late] Michael Leader was claiming the Stormtrooper blooper. So it left thinking, “How can he prove it?” That’s when I decided to speak up. I hear Michael has started to state a similar story. So after a while, and feeling rather peeved, I decided to write a song about the subject. It’s now out on iTunes, also on YouTube. It’s called, obviously, ‘Who Was the Stormtrooper Who Banged His Head?'”

And here is that video. Even though Goode apparently can’t prove to be the bumbling stormtrooper, the tune is still pretty catchy.