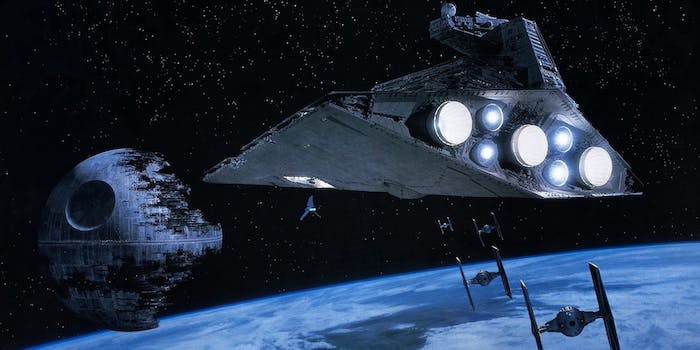 The film is scheduled for release next year.

If you thought Star Wars fans had reached critical levels of sheer joy, their cups overflowed again this morning with newly released details about the mysterious Rogue One project from Lucasfilm.

On the last day of Star Wars Celebration, a final reveal came by way of the Conversations with Gareth Edwards and Josh Trank panel located on the main stage. A teaser was developed specifically for the panel, showcasing a forest planet with a voiceover from Obi-Wan Kenobi’s speech during A New Hope and a final wide shot of the Death Star. While Trank was unable to make the panel, Kathleen Kennedy, Kiri Hart, John Knoll, and Edwards joined host Pablo Hidalgo to release the first details of Rogue One.

Also released during the panel was the official description of the film:

A band of resistance fighters unite for a daring mission to steal the Death Star plans in Star Wars anthology film, Rogue One #RogueOne.

Edwards was quick to discuss that this is a military film. A large portion of his production team has been culled from other war films such as Zero Dark Thirty and Saving Private Ryan. When pressed about the tone, Edwards said he’s aiming for realism and “hopefully [the film will] feel natural and subjective.” 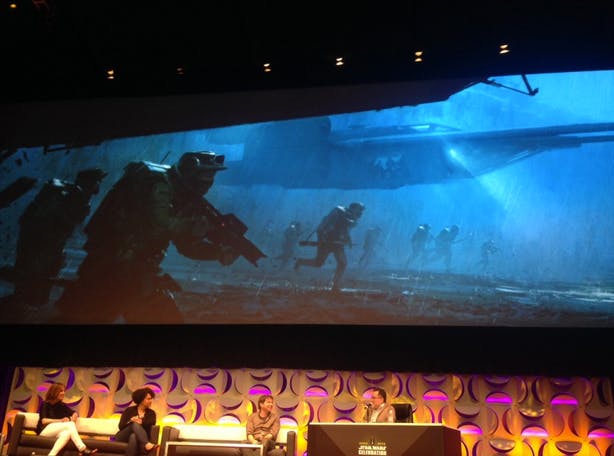 He also revealed to the crowd gathered on Sunday that Felicity Jones will be playing a Rebel soldier. Regarding her casting, Edwards noted that “he wanted to see fear, humor, and warmth in a character […] [and that] Felicity is the complete package.” When asked about the timeline and the lack of Jedi in the film, Edwards set an ominous tone: “It’s what happens when God isn’t here to save you.”

Lucasfilm Story Group has classified the new standalone films as Anthology Films. Kiri Hart, VP of development at Lucasfilm, described their approach to the Anthology Films, saying it came down to wanting the freedom to tell stories that could stand on their own within the Star Wars universe while maintaining the authenticity and ability to introduce new genres.

Rogue One is scheduled for release in December of 2016 and is currently in pre-production. Filming will begin this summer in the U.K. and locations around the world.