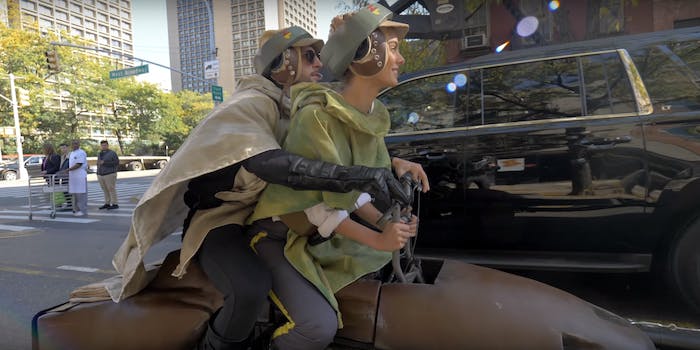 They acted out a 'Star Wars' chase scene through the streets of New York.

Star Wars is always a popular theme for Halloween costumes, so it takes serious skill to stand out. But by building a working speeder bike, these cosplayers managed to do so.

YouTubers Jesse Wellens and Carmella Rose dressed up as Luke Skywalker and Leia Organa, circa the Endor sequence in Return of the Jedi. It’s a relatively unusual choice of Star Wars costume, but the thing that really made it shine was their speeder bike. It’s a realistic replica of the hover speeders used in the Endor chase scene, and they took it out on the road in New York.

As you’d expect, it was an awesome Halloween treat for nearby Star Wars fans. And to complete the scene, they turned it into a full-blown chase sequence. The video begins with Luke and Leia, but soon enough they’re being followed by a stormtrooper on a speeder bike of his own.

The speeder was built by the Super 73 bike company, and you can watch the construction process in this fascinating behind-the-scenes video.