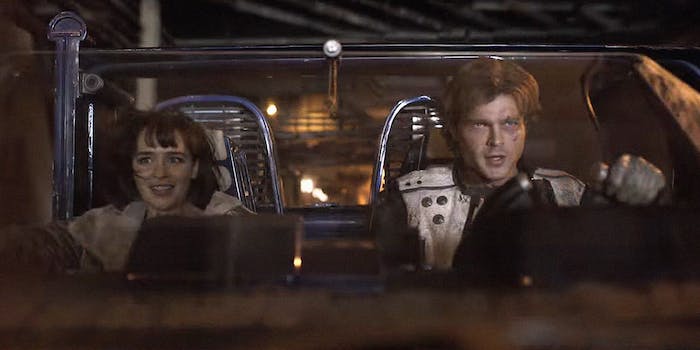 The first ‘Solo: A Star Wars Story’ toys are here—and Lando is a must-have

With the arrival of every new Star Wars movie, fans can expect a new wave of action figures and sets for them to collect and analyze for plot-related clues, and it’s no different with Solo: A Star Wars Story, with sets giving us closer looks at the the characters and the film’s clean and infamous ship.

Our first look at Hasbro’s Black Series action figures arrives courtesy of io9, which features close-ups of Han Solo, Lando Calrissian, Qi’ra, and an Imperial Range Trooper that Hasbro plans to officially unveil later in the week at the New York Toy Fair.

For Han, some aspects of his Solo outfit are rather familiar, while others we’re seeing for the first time. (He has a new jacket, for one.) Qi’ra (Emilia Clarke), on the other hand, is someone we’re only just meeting. She wore several outfits and hairstyles in the Solo trailer, and the outfit her action figure is wearing most closely aligns to the joyride she and Han Solo take at the very beginning of the trailer. Qi’ra and Han have known each other since childhood.

The Imperial Range Trooper features a fur coat, suggesting that Han and company might run into trouble on the snow-covered planet we saw in the trailer. And we have two words for Lando’s action figure: That. Cape.

You can view the full-sized photos of the set over at io9.

Lego also revealed its newest Millennium Falcon set, which it’s officially calling the “Kessel Run Millennium Falcon.” It’s a lot cleaner this time around with the gap at the front of the ship we’ve come to associate with the Falcon filled in. According to the Hollywood Reporter, the set will have 1,414 pieces, cost $169.99, and will include two figures—on top of Han, Lando, Chewbacca, Qi’ra, and a Kessel droid—that Lego is keeping under wraps for now.

I can’t think of a LEGO minifig that’s more fly than this @donaldglover #Lando from the Kessel Run Millennium Falcon set for #SoloAStarWarsStory. pic.twitter.com/B1wxwD4o2i

Lego says the set will arrive in April.

Entertainment Weekly also has a close-up look at several action figure sets planned for release including a different version of the Millennium Falcon, more Han and Qi’ra action figures (and one of Chewbacca), a Force Link that plays audio with certain toys, and re-releases of previous figures including Luke Skywalker, Maz Kanata, and Rogue One’s K-2SO.

Solo: A Star Wars Story arrives in theaters May 25.