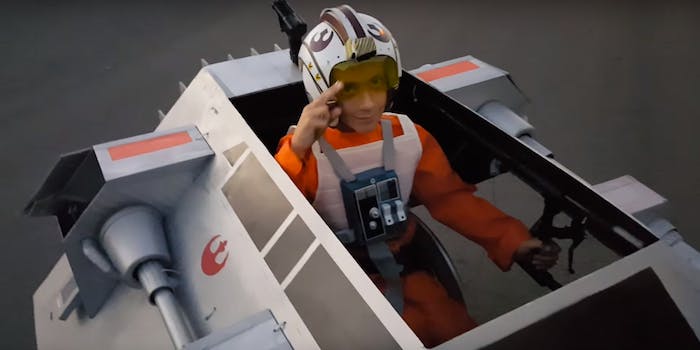 One Rebel Alliance pilot is more than ready to take on the Galactic Empire this Halloween.

Ryan Scott Miller transformed his 8-year-old son Jeremy’s wheelchair into a snowspeeder from The Empire Strikes Back‘s Battle of Hoth.

Jeremy has spina bifida, a birth defect in which one’s spinal cord doesn’t properly develop, and it has now become a tradition for Miller to make Jeremy’s wheelchair part of his costume.

Last year, he was Captain America on his trusty motorcycle, ready to save the day. The wheelchair has also been the Batmobile, a TIE fighter, and a pirate ship in the past.

Miller spent two weeks of late nights and weekends completing the snowspeeder, which he built with foam board, PVC pipe, bicycle brakes, and duct tape before spray-painting it.

“He saw it throughout the build process and every night he would have this open-mouthed look of shock,” Miller told CNET. “He couldn’t wait to get in it.”

Armed with Nerf darts that shoot glow sticks, Jeremy is more than prepared to take on the Empire—or maybe just other trick-or-treaters.