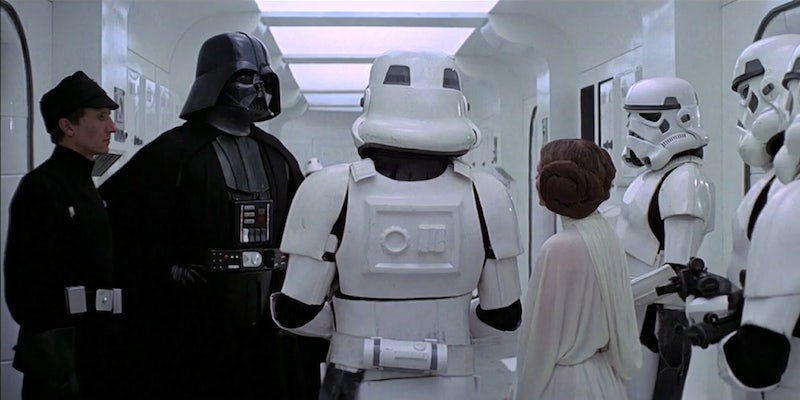 This isn’t the Skywalker twin you’re looking for.

The introduction of Darth Vader in the first Star Wars film, A New Hope, is pretty iconic. We can tell that he’s menacing from the beginning, but our hero, captured by a bunch of stormtroopers, isn’t shaken by any of it—even when facing imprisonment or death. But one Star Wars T-shirt offers a slightly different version of that scene.

The T-shirt, which is marketed toward boys, features Darth Vader wagging his finger at Luke Skywalker while two stormtroopers stand next to him. Granted, the stormtroopers were Photoshopped into the scene after the fact, but there’s another glaring error on the T-shirt: Luke wasn’t on the ship that Vader captured in this iconic opening to the movie. That ship belonged to Princess Leia.

@Target is selling a #StarWars shirt where Leia is replaced by Luke. It's a "boy's shirt" now. #IncludeTheGirls pic.twitter.com/rx0kOWMKIt

@G33KDad It's never our intention to leave anyone out! We'll share your thoughts with the right teams. Thanks for getting in touch with us.

(We’ve archived the Target page in case it gets deleted.)

As a reminder, this is how it plays out in A New Hope.

Target, one of the companies selling the shirt, said that they had alerted the manufacturer to the design error.

“We have shared these comments with our buyer, who has passed them along to the manufacturer of the item,” a Target spokesperson told the Daily Dot.

The mistakenly designed shirt is just the latest example of Princess Leia’s repeated lack of representation in Star Wars merchandise. She joins Black Widow and Gamora in the Underrepresented Female Merch club, the former of whom was also removed from her own scene in Age of Ultron merchandise. There is a market for merchandise that prominently features female characters, but manufacturers don’t seem interested in catering to that demographic.

The cycle repeats itself continuously. Fans get upset about the exclusion of female characters from a product, sparking a social-media backlash that eventually reaches the manufacturer, which offers an apology to customers and sometimes removes the item in question. It will probably continue to happen, too, so long as companies continue to market only toward boys.

The Force Awakens arrives theaters on Dec. 18, bringing with it an older Leia and fresh faces like Rey, Captain Phasma, and Maz Kanata. Let’s hope they don’t get the same merchandise treatment.