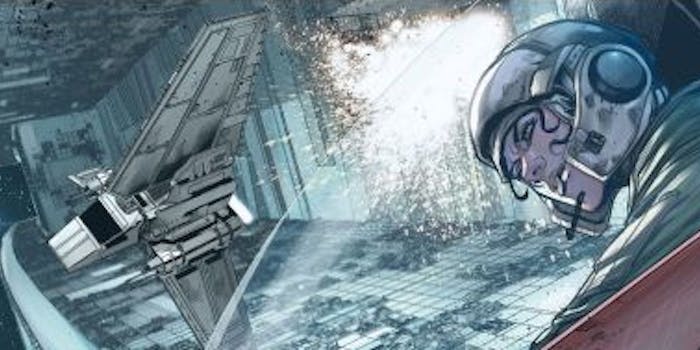 The Rebels have a lot to celebrate in this first issue.

The first issue of Marvel’s four-part miniseries transports fans immediately into the Battle of Endor seen in Return of the Jedi. Readers received a glimpse of this in previews of the comic, but there’s so much more fans can expect from the pages of issue No. 1.

This entry into the Journey to Star Wars: The Force Awakens publishing program is supposed to help explain some of what happened during the years after Return of the Jedi through the eyes of A-wing pilot Shara Bey. While this is the first part of the series and thus has to spend time introducing its new characters, it’s hard to find anything to be disappointed about in the issue.

The first few pages of the comic plunge us into the battle and into the cockpits of the Rebel Alliance starfighter squadrons fighting to survive. Shara is quickly introduced as Green Four and we witness her helping Luke Skywalker as he escapes the Death Star in an Imperial shuttle. It’s hard to deny the wave of nostalgia and immediate excitement the familiar battle can invoke when reading the opening pages, even though we’re seeing it through the eyes of a brand new character.

It’s hard not to like Shara almost instantly as we see her blow TIE fighters out of the sky with her amazing piloting skills. Then when everyone heads down to the moon to celebrate, we learn she has something else on her mind: finding her husband Kes. In her search she encounters some familiar faces. Han Solo, Chewbacca, and Lando Calrissian chat with Shara as she asks Han about the location of his strike team, which her husband was a part of. This meeting with the classic characters—even more so than her run in with Luke—feels natural and not forced. The chat feels like something that could just happen amid a grouping of Rebel Alliance members. It’s definitely fun to see the familiar characters present, but it’s better to see that they’ll just be on the sidelines as the comic focuses on the new characters. 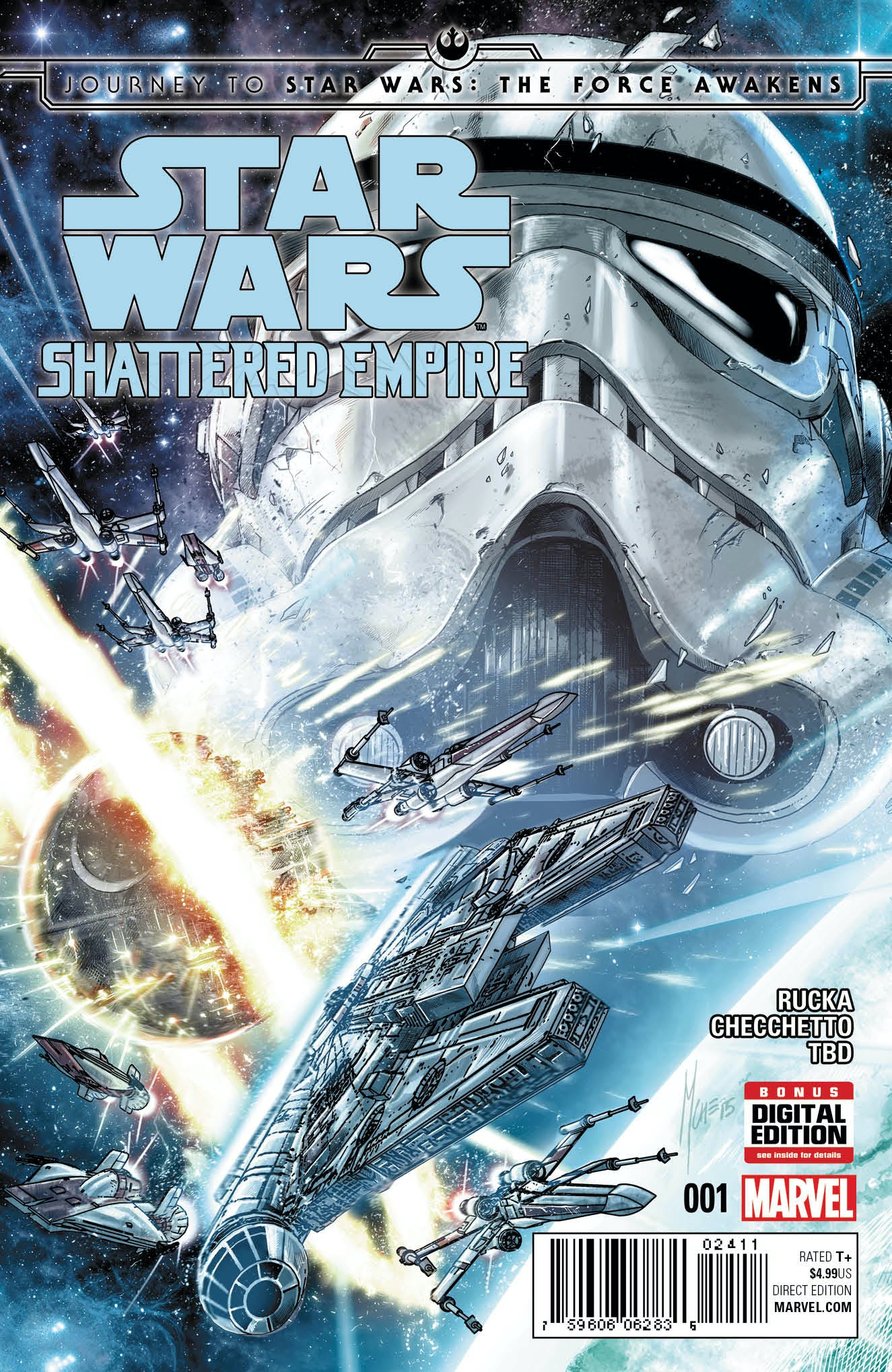 Eventually Shara does reunite with Kes and their meeting reveals a potential connection this comic may have to The Force Awakens beyond showing us events leading up to the movie. When Kes arrives, Shara answers him calling her Lieutenant Bey by calling him Sergeant Dameron. Does that mean Kes or the pair have a connection to Force Awakens pilot Poe Dameron? That remains to be seen, but it was a fun reference casually dropped in the comic nonetheless.

After the couple and the rest of the Rebels spend the night celebrating, they quickly set out on a new mission to take out an Imperial base on the moon. Apparently what’s discovered reveals that the fight is definitely not over yet for our heroes. That’s only to be expected, since there are three issues left to this series and about 30 years before the events of The Force Awakens unfold.

The first issue overall offers an interesting start to the series that immediately draws you in with familiar settings and characters, but will make you want to stay around for the new faces you meet. It might be disappointing to some that so much time is spent revisiting the end of Return of the Jedi, but the frustration is countered by the fact that it does do a good job of setting up the new characters we’ll be following in future issues.

The art by Marco Checchetto is a major part of making the world seem so alive and vibrant. His work is beautiful, whether it’s depicting space battles or quiet moments between the couple. Colors just seem to pop in all the right places on each page thanks to the work of Andres Mossa. As for the story, it moves quickly from the battle to the celebration to the next step in taking down the Empire for good. The only problem is by the time it ends, it feels like it drops off before anything new really gets started. While it feels a bit abrupt, it succeeds in making us want to pick up the next issue at least.

For any fans eager to learn more about what happened after Return of the Jedi, are curious about connections to The Force Awakens, or are just looking for a new Star Wars story with potential, Shattered Empire is worth the read.