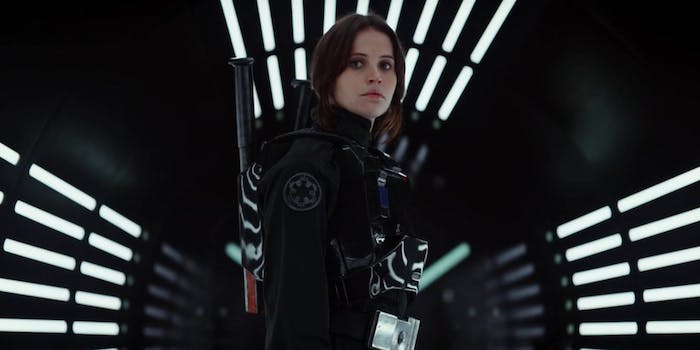 Do we detect a 'Hunger Games' vibe here?

The first trailer for Rogue One: A Star Wars Story debuted on Good Morning America this morning, and it’s got a strong Hunger Games vibe going on.

Rogue One is the first of several planned Star Wars spinoffs including a Han Solo movie, and it takes place shortly before A New Hope. The story follows a team of Rebel Alliance operatives on a mission to steal the plans for the Death Star, led by a character played by Felicity Jones.

As expected from the first cast photo, this film has a darker look than the classic Star Wars aesthetic of The Force Awakens. This is a story about the desperate side of the Rebel cause, featuring characters who bore the brunt of violence and oppression during the height of the Empire’s rule.

Rogue One is due in theaters this December.