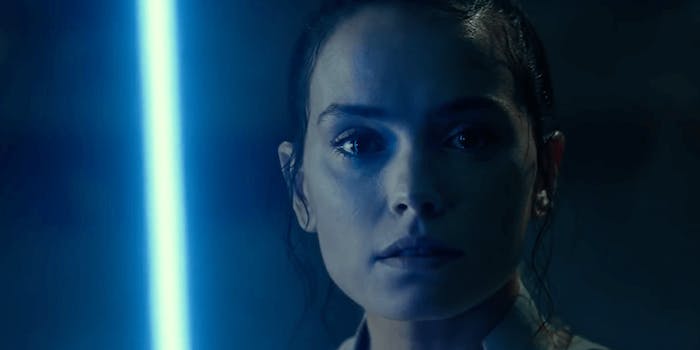 This story is spoiler-free.

The latest Star Wars installment, The Rise of the Skywalker, is being spoiled in a way that no previous large tentpole film has before.

In fact, people are sharing TROS spoilers via dozens of Star Wars-related hashtags, on fanfic forums, on Twitter—any place where spoilers can be posted. Disney did what it could to prevent footage and plot leaks ahead of the film’s release. Mission failed.

Me hiding from Rise of the Skywalker spoilers pic.twitter.com/UgBXxP6fgz

Those who went to early screenings of the movie have confirmed that the leaks showing up on social media are accurate. They are likewise tweeting photos they took during screenings. From this reality, fans are going to painstaking lengths, including staying off Twitter, YouTube, and Reddit altogether, as not to have a spoiler photo sneak up on them.

Over on fanfic forums, the fates of major characters are showing up as fan art.

But why is this happening at all?

So… spoilers have been leaking all over the internet and I’m leaving Twitter until I’ve seen it, I would just like to say thank all of you for everything, this journey will y’all to The Rise of Skywalker has been so much fun!

may the force be with you, always pic.twitter.com/9Bn8ncATqQ

The first clue is in the fact that the trailers seemingly spoiled the film before it got off the ground. Massive plot details about the film’s villain(s) were apparently delivered in trailers.

Another part of the issue points to incentivizing the spoiling.

Burger King launched a promotion in Germany, using voice-activated coupons that allegedly contained Star Wars: The Rise of Skywalker spoilers. The fans were required to record themselves reading the spoilers out loud. Once they turned it in, they would win a free Whopper. Burger King even produced a Star Wars-themed advertisement that shows spoilers embedded within their menu.

However, it appears that Lucasfilm and Disney have decided to lean directly into the spoiling culture. Lucasfilm President Kathleen Kennedy even justified it, to no small extent, as “fan engagement” and the notion that “spoilers” are fine as long as the plot isn’t laid out bare.

“Because we’re bringing this to a conclusion, many of the characters that are playing a significant role in the story, the fans know,” she told i09. “They don’t know how this story is going to unfold, but they know who they are. It’s not like Baby Yoda. [Laughs] We’re not revealing something significant like that. And I think that that is important to this story.

“We’re not trying to be coy and unnecessarily clever,” she continued. “We certainly tease Palpatine, but we arrived at a decision pretty early on, right around Celebration, that we were like, ‘Wait a minute. The fans are going to want that. We need to be somewhat more open than we would normally be because there isn’t something to hide here. There’s actually something to tantalize everybody with. To let speculation be a part of the conversation.'”

Lucasfilm and Disney seem to have implicitly encouraged the spoiling, which lifted the already-hiked veil—providing a go-ahead for those selfish people who enjoy ruining things for everyone else.