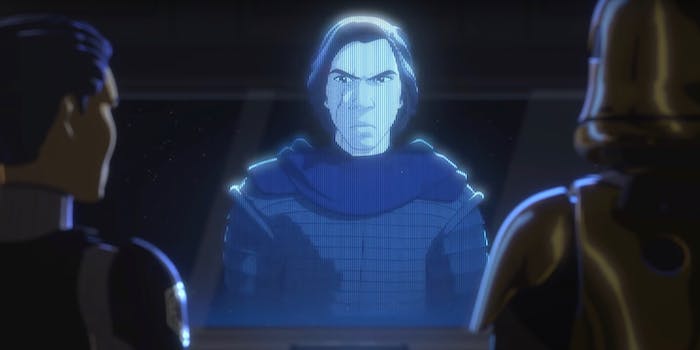 It will also be the final season.

Star Wars Resistance had ties to The Force Awakens and the expanding sequel trilogy, yet it largely branched out to tell its own cohesive story. But in season 2, it’s going to tie into another Star Wars film as we follow the motley crew of the Colossus in their own adventure.

Lucasfilm debuted the first trailer for the second season of the Emmy-nominated series, but in doing so, it also dropped at least one big reveal: it will also be its last.

At the end of season 1, Star Wars Resistance revealed that the Colossus—the refueling station where Resistance spy Kazuda Xiono had been assigned to watch—was actually a spaceship capable of traveling through hyperspace. Although they planned to travel to D’Qar to meet up with the rest of the Resistance, they ended up a little off-course, leaving them on the run from the First Order with dwindling supplies.

The trailer teases a bit of everything, including a bit of mythology, world-building, and a nod to that infamous Saturday Night Live sketch, but the biggest reveal comes at the end: Kylo Ren will make his first appearance on the series and will be voiced by Matthew Wood, who previously was the voice for General Grievous in Star Wars: The Clone Wars. Also joining the cast this season are Joe Manganiello, Daveed Diggs, and Lucy Lawless.

Here is the official synopsis on Star Wars Resistance season 2 from Lucasfilm, which is set during The Last Jedi as well as the lead-up to The Rise of Skywalker (which kicks off about a year after The Last Jedi).

The story picks up after a harrowing escape from the First Order, as the Colossus and all its residents find themselves lost in space, pursued by Agent Tierny and Commander Pyre. Kaz and team also face a myriad of new dangers along the way including bounty hunters, a suspicious Hutt, General Hux and Supreme Leader Kylo Ren. Meanwhile, Tam grapples with her future and where her true allegiance lies, with her friends or the First Order. The thrilling final season will showcase how the unlikeliest of heroes can help spark hope across the galaxy.