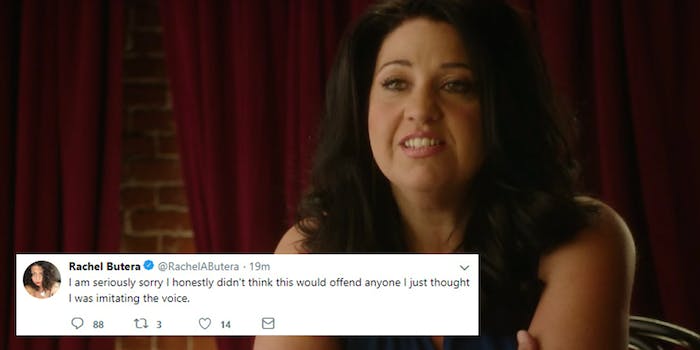 Christine Blasey Ford’s testimony to the Senate Judiciary Committee has captivated the country, but it’s also been met with derision and pushback. In one case, an actress’ imitation of Ford has been interpreted by many as mockery.

Voice actress Rachel Butera portrays Leia Organa on Star Wars Resistance, Disney’s upcoming animated prequel to The Force Awakens, and fans heard her for the first time in a trailer released Thursday afternoon. But for a short time, they also heard her doing an imitation of Ford.

Ford’s voice shook as she read her opening statement before the committee—which recounted the night she says Brett Kavanaugh sexually assaulted her, as well as the effects it had on her for decades—and endured several hours of questions from the Senate Judiciary Committee.

“I can’t believe this is my voice, can you??? Dr. Christine Blasey-Vocal Fry-Ford,” Butera wrote in the now-deleted tweet.

The voice actor for Leia in Star Wars Resistance mocking the voice of Dr. Ford testifying about her sexual assault. You want to believe that people who take on roles like this would have more empathy. I don’t see Carrie having anything nice to say about this. #StarWarsResistance pic.twitter.com/jUvhWCZI2G

Her video was immediately met with outrage from people who saw it as mocking Ford and her story. Some called for Disney and Lucasfilm to recast Butera’s role.

Rachel Butera deleted the video she made where she makes fun of a sexual as a survivor's voice. The fact that she even thought for a second it was ok to do, and then put it on here, nope. Not my Leia, and not the Leia our children deserve. Not watching. @starwars @DisneyChannel https://t.co/tyyqmeE16L

You're the voice of General Leia on @starwars Resistance and you're using your platform to mock a woman who is baring her soul about a sexual assault in front of the country. Shame on you. Carrie Fisher would be appalled. https://t.co/W6Urtbq6AK

Yo, @starwars as someone with over 40 years as a fan, the atrocious level of disrespect, and of cruelty towards quite a large part of your fan base by proxy, is pretty gross.
You might want to consider recasting if you don't want to kill your show. https://t.co/8LoTcoGXdQ

Butera deleted the video shortly after posting it and receiving backlash from fans, but a version of it was uploaded by SYFY Wire’s Courtney Enlow. Others circulated on Twitter.

The Daily Dot has reached out to Disney and Lucasfilm for comment, and we will update if we hear back.

Butera later said that she was attempting to imitate Ford’s voice and wasn’t trying to mock her.

“I was by no means mocking a rape victim I am 100% on Christine Blasey Ford’s side!” Butera wrote. “I am just a vocal impressionist and decided to imitate her voice but it was a mistake. I apologize a [sic] and I believe ALl women.”

A few minutes later, she added, “I am seriously sorry I honestly didn’t think this would offend anyone I just thought I was imitating the voice.”

The comment about vocal fry struck a particular nerve. It’s a critique usually reserved for women’s voices, but worse, Butera’s video made light of a sexual assault survivor who became emotional as she told the nation what happened to her. On a day where so many people, especially women, watched a woman relive what happened to her on national television, the video (whether or not it was meant to mock Ford’s voice) was yet another affront to those who have been particularly affected by Ford’s testimony.